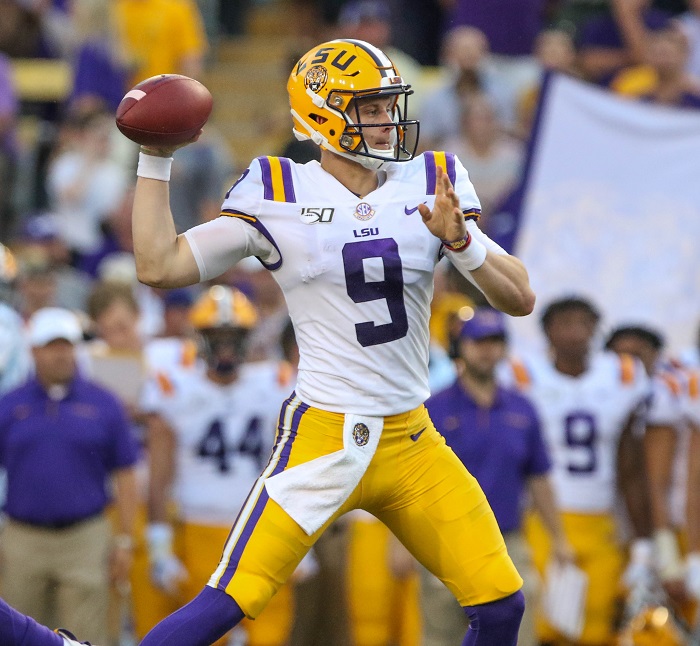 After an abysmal 2019 season, the Bengals are desperate for a spark that can ignite their franchise and fanbase alike.

Washington could go in several directions here, but the talent of Chase Young is too much for them to pass on.

The Lions are desperate for impact players on the defensive side of the football.

The Dolphins could have stayed at number five, but there was a possibility of someone sneaking ahead of them to select Tua Tagovailoa.

With Isaiah Simmons off of the board, it makes sense for the Giants to trade down, and get more value.

If the Chargers feel that Tyrod Taylor will be their guy going forward at quarterback, then they must protect him up front.

The landscape of the Panthers offense is changing, and speed will be the name of the game on that side of the football.

The Cardinals have their franchise quarterback in Kyler Murray, and although that he is scrambler, they still need to protect him.

The Jaguars traded cornerback Jalen Ramsey last year to the Los Angeles Rams, and now it is time for them to rebuild their defense.

The Browns offensive line was abysmal last season which makes the selection of Andrew Thomas a no-brainer.

The Jets need to be more explosive in the passing game and CeeDee Lamb has the ability to stretch the field.

In watching the Raiders last season, there was a need for them to get tougher on defense.

The 49ers got this pick as the result of trading defensive end DeForest Buckner to the Colts, and they don’t waste anytime in finding his replacement.

Yes, the Bucs now have Tom Brady as their quarterback, but they still need to fix their issues on defense.

The Broncos recently acquired defensive tackle Jurell Casey from the Titans, but they are not done in regards to beefing up their defensive line.

After losing Byron Jones in free agency, the Cowboys will need to add more depth to their secondary.

In swapping first-round picks with the Dolphins, the Giants get an additional first-round selection which they’ll use to upgrade one of the worst pass rushes in the NFL.

The Raiders continue to upgrade their defense with an impact safety.

Over the past few years the Jaguars have had one of the worst passing attacks in the NFL as they need an infusion of speed at wide receiver.

When the Seahawks won the Super Bowl in 2013, they did it with one of the best secondaries in the NFL. And as Seahawks head coach Pete Carroll has an eye for talent, he will not hesitate to trade up here to find an impact safety in Xavier McKinney.

The Vikings just traded wide receiver Stefon Diggs to the Bills, and they won’t waste anytime finding his replacement.

You never know what Patriots head coach Bill Belichick is going to do, but this team needs to find their future franchise quarterback.

The Saints had a solid defense last year, but they have a glaring need at linebacker.

The Vikings parted with longtime defensive tackle Linval Joseph this off-season which leaves a huge void on their defensive line.

If the Dolphins do not trade this pick, they could add some explosiveness to their passing game.

Josh Jones will be a project, but he can turn into a quality offensive lineman for the Eagles.

The rich get richer as the Ravens are putting even more talent around quarterback Lamar Jackson.

With the Titans having already traded defensive tackle Jurrell Casey to the Broncos this off-season, they need to find a new stud on their defensive line.

The running game has been a trouble point for the Packers offense for far too long, and hopefully they finally get the impact player that they need.

In watching the Niners loss Super Bowl 54 to the Chiefs, their secondary got torched in the fourth quarter.

The Chiefs are the Super Bowl Champs, but that does not mean that they cannot upgrade their secondary.