Previous Next
Top Sports Moments At The Georgia Dome Part 4 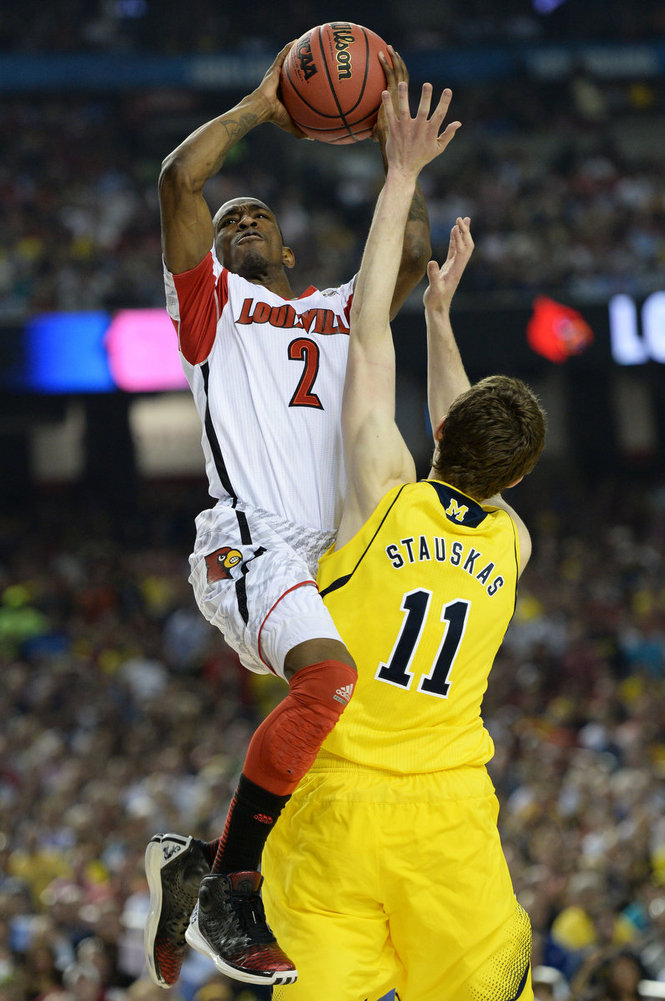 After years of being a non-factor in college basketball for nearly the Michigan Wolverines returned to the college basketball spotlight during the 2012-2013 college basketball season which culminated with the school’s first trip to the Final Four since 1993. The Louisville Cardinals on the other hand had reached the Final Four in 2012 only to be knocked off in the national semifinal by their in-state rival in the Kentucky Wildcats.
The Wolverines arrived at the NCAA Championship Game with a record of 31-7 and after knocking off the Syracuse Orange 61-56 in the national semifinal, Michigan liked their chances in facing another Big East Conference school in Louisville. The Cardinals came into the NCAA Tournament as the number one overall seed and heading into the title game they were riding a 15-game winning streak.
In the first half it was Michigan’s outside shooting against Louisville’s uptempo offense. Michigan was paced by reserve guard Spike Albrecht who hit four three-point shots. But Louisville looked to counter with their dynamic backcourt of Peyton Siva and Russ Smith. Smith had a cold shooting night, but Siva picked up the slack with 18 points, 6 rebounds, 5 assists, and 4 steals.
At the half Michigan was leading 38-37, but Louisville head coach Rick Pitino is infamous for motivating his team and getting them to turn it up to another level.
In the second half Louisville’s full-court press attempted to get Michigan out of their offensive rhythm, but the Wolverines countered with guards Trey Burke and Tim Hardaway Jr. who combined to score 36 points. Louisville’s depth was on display as well, as forward Chane Behanan scored 15 points and 12 rebounds while reserve guard Luke Hancock scored 22 points off of the bench.
The Cardinals would hold off the Wolverines 82-76 and win their third national championship in school history.
Week 7 1994 NFL Season-San Francisco 49ers vs. Atlanta Falcons Cornerback Deion Sanders spent the first five years of his National Football League career with the Atlanta Falcons. After the 1993 NFL season was complete, Sanders would go on to sign a one-year deal with the San Francisco 49ers.There was still some animosity between Sanders and the Falcons being that he signed with a team within the NFC West.
Prior to the game the 49ers defense was introduced and the fans in attendance at the Georgia Dome let Sanders hear it.
The 49ers jumped out to an early 7-0 lead when running back Ricky Watters scored on a 10-yard touchdown.
Sanders was the center of attention during the game which led to a fight with his former Falcons teammate in wide receiver Andre Rison which did not slow down San Francisco’s onslaught.
The 49ers were ahead 21-3 in the second quarter when Sanders put the icing on the cake when he intercepted Falcons quarterback Jeff George and returned the football 93 yards for a touchdown.
The 49ers would defeat the Falcons that afternoon by a score of 42-3 to improve their record to 5-2. The 49ers would finish the regular season with a record of 13-3 en route to winning their fifth Super Bowl Championship.
1997 SEC Championship Game Tennessee Volunteers vs. Auburn Tigers 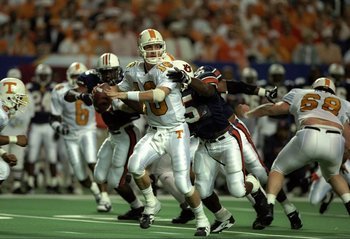 The first four editions of the Southeast Conference Championship Game primarily featured the two best teams in the conference in the Florida Gators and the Alabama Crimson Tide. But the 1997 edition of the conference title game featured the conference’s best player.
Quarterback Peyton Manning was the SEC’s best player in 1997 and he led the Tennessee Volunteers to a 10-1 record in the regular season and a spot in the SEC Title Game. Manning and the Vols would be opposed by the Auburn Tigers who had a 9-2 record and they were looking to play spoiler. This was the first time that neither Florida or Alabama would be in the SEC Championship Game, but the Vols and Tigers gave us a title game for the ages.
It didn’t take Manning that long to get Tennessee on the scoreboard as he found his favorite wide receiver Peerless Price early in the first quarter on a 40-yard touchdown pass to put the Volunteers up 7-0.
During his tenure as Auburn head coach, Terry Bowden preached all three fazes of the game and in the first half the Tigers scored in each facet to take a 20-10 lead into the dressing room.
In the first half the Tennessee defense was unable to stop Auburn quarterback Dameyune Craig. But in the second half, led by linebacker Al Wilson the Tennessee defense would shut down Auburn’s running attack in order to make them one-dimensional on offense.
Even with that Auburn still had a 29-23 lead until early in the fourth quarter when Manning found wide receiver Marcus Nash for a 73-yard touchdown pass to put the Vols up 30-29.
Tennessee would go on to win by that score and Manning would be the game’s MVP.
2006 Sugar Bowl Georgia Bulldogs vs. West Virginia Mountaineers

Since 1935 the Sugar Bowl has best a Southern tradition in the beautiful city of New Orleans. But in the aftermath of the Hurricane Katrina in 2005 which damaged the Louisiana Superdome, the 2006 Sugar Bowl would be played at the Georgia Dome. What made the game more intriguing was that the home-state Georgia Bulldogs would be playing in the Sugar Bowl as the Georgia Dome is only a short ride from their campus in
Athens. There the Dawgs would meet the upstart West Virginia Mountaineers out of the Big East Conference.
Georgia came onto the field and the were greeted by a sea of red. At first the Bulldogs took the Mountaineers for granted and after the first quarter it was West Virginia with a 21-0 lead as Georgia was unable to stop their spread offense.
Early in the second quarter West Virginia running back Steve Slaton scored from 18 yards out to extend the Mountaineer lead to 28-0.
Slowly but surely the Bulldogs would begin to chip away at West Virginia’s lead and when Georgia quarterback D.J. Shockley found tight end Leonard Pope with just under a minute to play in the first half, the Mountaineers were only leading 31-21.
After the high scoring first half, there was only one touchdown scored in the third quarter and it was by Georgia when Shockley found wide receiver A.J. Bryant to cut the Mountaineer lead to just three points. But in the fourth quarter just when West Virginia appeared ready to surrender the lead to the Bulldogs, it was Slaton once again; this time on a 52-yard touchdown run to put the Mountaineers up 38-28.
West Virginia would go on to win the game 38-35 and with 204 yards rushing, Slaton would be named the game’s MVP.
7/6/1998-Bill Goldberg vs. Hulk Hogan In 1998, World Championship Wrestling was in the midst of an era that was dominated by the New World Order. Hulk Hogan was the WCW Heavyweight Champion while The Outsiders (Scott Hall and Kevin Nash) were the tag champs.
In 1997 former National Football League player Bill Goldberg made his WCW debut and he took the company by storm with his sheer power and reckless abandon. Early in 1998 Goldberg became United States Heavyweight Champion and his popularity continued to soar. By the summer on 1998 Goldberg was still undefeated and he now set his sights on the WCW Title which was held by Hogan.
On the July 6 edition of Monday Night Nitro, Hogan promised Goldberg a title shot if he could get past Hall in a singles match. Goldberg disposed of Hall which left Hogan no option but to enter the squared circle with the hottest man in professional wrestling.
Prior to joining WCW, Goldberg played for the Atlanta Falcons for two seasons and he was thus billed as being from Atlanta, Georgia. The crowd at the Georgia Dome was buzzing and once Goldberg gave the legendary Hogan the “spear” which was followed by his signature “jack hammer” it was all over except the shouting as Goldberg would be crowned as the new WCW Heavyweight Champion.
Source: Pro-football-reference.com