After a six-year hiatus everything is in place for the University of Connecticut to rejoin the Big East Conference which will be a huge boost for the school’s premier athletic programs such as men’s and women’s basketball. The past six years have seen Connecticut play the part of a “fish out of water” in the American Athletic Conference. Uncommon rivalries and lengthy travel to different regions of the country just to play conference games was physically taxing on Connecticut’s student-athletes, as well as financially straining the school’s pocket book. Last year UCONN claimed a $41 million loss in athletics, and instead of them continuing to attempt to put a square peg into a round hole, they cut their losses and returned to the Big East. 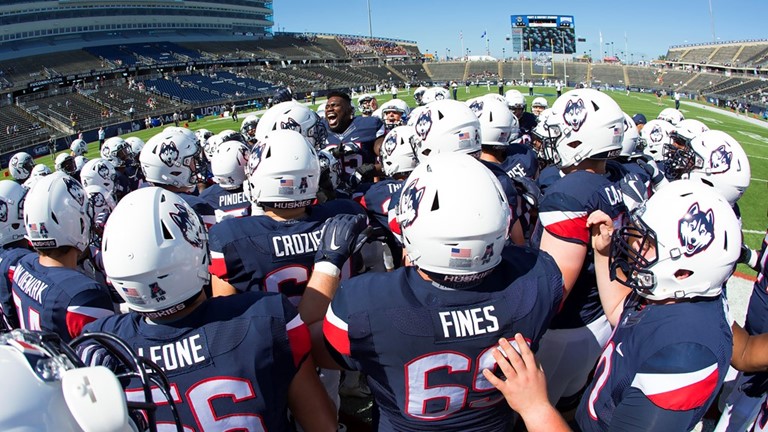 Connecticut’s return to the Big East means that their football program will most likely compete as a football independent at the Football Bowl Subdivision level as the conference no longer participates in the sport. And as UCONN is cutting their losses, I doubt that they will be alone.

The gap between the haves and have nots in college football is growing each year as the lucrative sport is only that if you’re winning, while you also need to be getting a piece of a big television contract. Since UCONN began competing at the FBS level in 2000, they only claimed one conference title, while they only have one winning season this decade which is not good for business in whichever conference that they are in. And when the Atlantic Coast Conference was in the process of poaching the original Big East for football schools, they didn’t need Connecticut since they already had the New England market when they convinced Boston College to join in 2004. The result of this was that UCONN was left in limbo and forced to compete in the AAC which meant that their annual payout for football was going to be far less than the Power Five Conferences such as the ACC.

And this is what college football has become due to re-alignment as schools with fledgling football programs must now think long and hard as to whether or not they need to maintain their status in order to not keep up with the Joneses.

Every school is not going to be as fortunate as the members of the Big Ten and Southeastern Conferences who paid out more than $50 million and $43 million to each of their member schools respectively this past year as the big television networks such as CBS and FOX will bend over backwards to show their games as that revenue alone is enough to fund an athletic department and then some. The have nots of course are not as fortunate as outside of alumni and some folks in the New England area, people are not lining up to see UCONN football.

This is the downside of re-alignment that nobody wanted to talk about several years ago as the schools who are not big draws at the box office were going to find themselves making tough financial decisions in regards to football. UCONN now joins schools such as the University of Massachusetts and Brigham Young who have left conferences in order to become football independents which gives them free reign to make their own schedules for the sport, secure television money, and not put a strain (travel wise) on their other athletic programs if they choose to. In the case of Connecticut, they had a segue to get back to the Big East due to the fact that they still had a rapport with some of the member schools such as Georgetown and Villanova due to their rivalries on the hardwood. And because of that Connecticut can now get back to what they were doing before in men’s basketball in regards to recruiting the New York/New Jersey area which helped their success.

Although their are more than 120 FBS schools, only a hand few have a legit shot to win the national championship due to how the deck is stacked. The Power Five Conferences are slugging it out for four berths in the College Football Playoff which means that you’ll never see the “little guy” have a chance which Central Florida found out the hard way in 2017. UCONN was nowhere close to competing for an AAC Title, more less a national title, and they made the right choice in regards to cutting their loses in regards to football and getting back to their basketball roots.

Like Connecticut, the other former football schools of the Big East have struggled on the gridiron whether it has been in the ACC, Big 12, or Big Ten as only Virginia Tech has been able to claim a conference title in football since leaving. But even as those schools might struggle on the football field, they will still get a sizable check to get pimped out for their troubles.

And just as many school administrators played the copycat game in regards to following the trend of re-alignment several years ago, maybe UCONN’s departure from the AAC in favor of the non-football Big East will make other schools question their commitment to football which has become such a hit or miss sport financially.