A Huge Stain For Golden Boy

Previous Next
A Huge Stain For Golden Boy

From the early 1990’s to the late 2000’s, Oscar De La Hoya was one of the most recognizable faces in the sport of boxing. As a fighter De La Hoya was able to win titles in five different weight classes and his 39-6 record was one of the best during that era. De La Hoya was able to keep that success going for himself as he parlayed his knowledge of the sweet science into becoming a boxing promoter. De La Hoya’s Golden Boy Promotions is one of the most recognizable brands in boxing and he has been a part of some of the biggest boxing matches this decade. De La Hoya has also made it his business to find his own golden boy to be the poster boy for his company in Saul “Canelo” Alvarez.

But De La Hoya will now have to make due without his meal ticket as Alvarez has failed a pair of drug tests after the banned substance clenbuterol was found in his system. Alvarez has gone on record to claim that he digested “tainted meat”, but the Nevada State Athletic Commission isn’t buying it as after temporarily suspending the fighter, they are seeking to impose a year-long ban on the pugilist.

Alvarez’s looming suspension has forced him to pull out of a rematch bout with Gennady Golovkin that was set to take place next month in Las Vegas and his recent problems only add to the controversy which ensued following their first meeting last September. 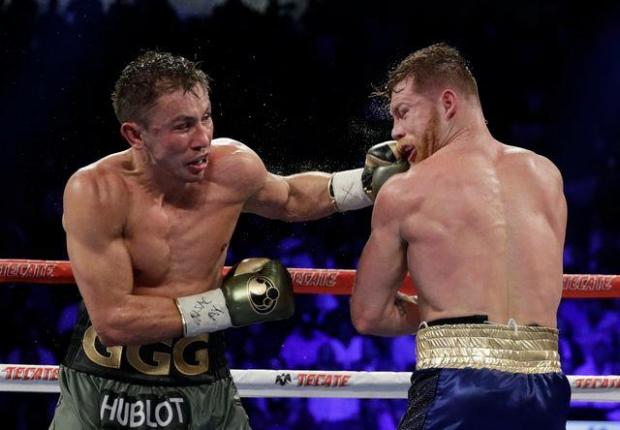 There was plenty of build up for last year’s meeting between Golovkin and Alvarez as each man possesses awesome punching power, and it was time to determine once and for all who would be the reigning king of the Middleweight Division. After both fighters felt each other out in the opening stages of the bout, things began to open up as Golovkin began to assert himself. Alvarez attempted to shrug off Golovkin’s punches, but you could see that some damage was being done.

Alvarez was no pushover throughout the contest, but as he unloaded some massive punches on Golovkin, he was surprisingly able to absorb them and keep coming forward to the surprise of Alvarez. Alvarez finished strong in the final rounds of the contests, and when the final tally was announced, this fight was scored as a draw in spite of the fact that most people felt that Golovkin had done enough to win. And now for those people who felt that Golovkin won last September feel more vilified about their claim since Alvarez failed his drug test which will now cast a shadow of his career.

De La Hoya has done a good job in propping up Alvarez who has become his company’s meal ticket. Alvarez is Mexico’s new favorite son for boxing and De La Hoya has shown deep pockets to make sure that his prized pugilist maintain’s a stellar record in the ring.

In Alvarez’s unanimous decision victory over Austin Trout in April 2013, he got exposed as his inability to knock out Trout left him vulnerable to many shots. The same could be said about Alvarez’s contest in July 2014 versus Erislandy Lara where he scored a split-decision victory. For some people Lara out boxed Alvarez as he once again struggled when he faced someone who was more concerned with boxing instead of trading punches. And since then Alvarez has won due to the fact that he takes advantage of the liberal rules which now allows fighters to weigh-in for a fight the afternoon before as opposed to the same day. We’ve seen instances where Alvarez will re-hydrate and come in with a 20-pound weight advantage as was the case for his November 2015 meeting with Miguel Cotto as after both sides agreed to fight at a 155-pound catch weight, Cotto came in at about 150, while Alvarez was more than 170 lbs. This pound differential was the difference in the fight as it allowed Alvarez to absorb most of the shots that Cotto delivered.

But the past few months have shown that Alvarez is not invincible as the question marks began to arise following his controversial match with Golovkin and now this failed test puts a huge cloud over his career. Make no mistake about it that Alvarez is De La Hoya’s “Golden Boy”, but he has made his mark by beating up on smaller fighters. And when Alvarez stepped into the ring with someone who had the same amount of steam that he has in Golovkin, his awesome punching power was not as awesome.

So now Alvarez has to play the waiting game as his fate rests in the hands of the Nevada State Athletic Commission who are seeking to put him on the shelf in the prime of his career. There is still the possibility of Alvarez having a rematch with Golovkin who waited for several years to fight Alvarez after De La Hoya continuously put the fight off. But now we are looking at a situation where Golovkin will be at least 37-years of age if he were to fight Alvarez again as De La Hoya would be hoping for a slower and weaker Golovkin. However this strategy failed the first time around as Golovkin was more than what Alvarez and De La Hoya had bargained for.

But regardless of what happens down the road for Alvarez, this failed test is going to be something that he never recovers from as aside from ducking Golovkin for several years now, he has to wear the crown of a cheater.