When outfielder Ichiro Suzuki came to the United States in 2001, he arrived with some fanfare, but nobody could have expected what he has gone on to do. Suzuki came to the United States from his native Japan, and he had a reputation as a quality baseball player. In ten seasons in Japan with the Orix Blue Wave, Suzuki batted .353 as he collected 1,278 career hits. But when it came time to be a part of Major League Baseball in 2001, the skeptics came out as people were doubting the he would be able to do it here.

Suzuki would join the Seattle Mariners and as the club had already bid farewell to one legend in outfielder Ken Griffey Jr. who had been traded to the Cincinnati Reds in 2000, while also seeing shortstop Alex Rodriguez leave as a free agent to join the Texas Rangers, they were desperate for star power.

But Suzuki would immediately quiet the naysayers as he batted .358, along with stealing 69 bases for the M’s in 2001. Suzuki would tally 242 hits which at the time was ninth all-time on Major League Baseball’s single-season hits list. Suzuki’s strong 2001 campaign would see him recognized as the American League’s Rookie of the Year and MVP as he quickly became a household name.

Suzuki would quickly show that he was far from being a one-year wonder as in each of his first 10 seasons in Major League Baseball, he would reach the 200-hit plateau which included him breaking the single-season record for hits in 2004 as he surpassed George Sisler who had tallied 257 hits in 1920 as he went for 262. In nearly 12 seasons with the Mariners, Suzuki would have 2,533 hits, and even at the age of 38 in 2012, the iconic 3,000 mark was in his grasp. In Seattle, Suzuki only reached the playoffs in 2001, and he appeared to be running his course in the Pacific Northwest.

The Mariners would trade Suzuki to the New York Yankees in 2012 as he was taking his act to Broadway. In 67 games with the Yankees in 2012, Suzuki would bat .322 and he indeed got back to the playoffs. But in the postseason, the Yankees would fall to the Detroit Tigers in the American League Championship Series. Suzuki would not reach the postseason again with the Yanks, and after the 2014 Major League Baseball season at the age of 40, he was once again headed for a new baseball home.

Suzuki would join the Miami Marlins after the two sides agreed on a one-year deal that was worth $2 million. Suzuki wasn’t the player that he once was, but his veteran presence was needed on a young Marlins team.

On July 28, Suzuki collected his 2,998th Major League Baseball hit against the St. Louis Cardinals, and after that fans were waiting with baited breath each day that they came to the park as they were waiting to see history. But for more than a week, Suzuki would go hitless as you wondered if the pressure was getting to him. However this past Saturday, Suzuki got his 2,999th hit against the Colorado Rockies. And this past Sunday, Suzuki decided to put the chase to rest when he collected his 3000th hit with a triple. Suzuki joined Paul Molitor as the only players that had a triple be their 3000th hit, and the fans at Coors Field in Denver gave him his just do with a long, standing ovation as he is just the 30th player to reach the plateau. 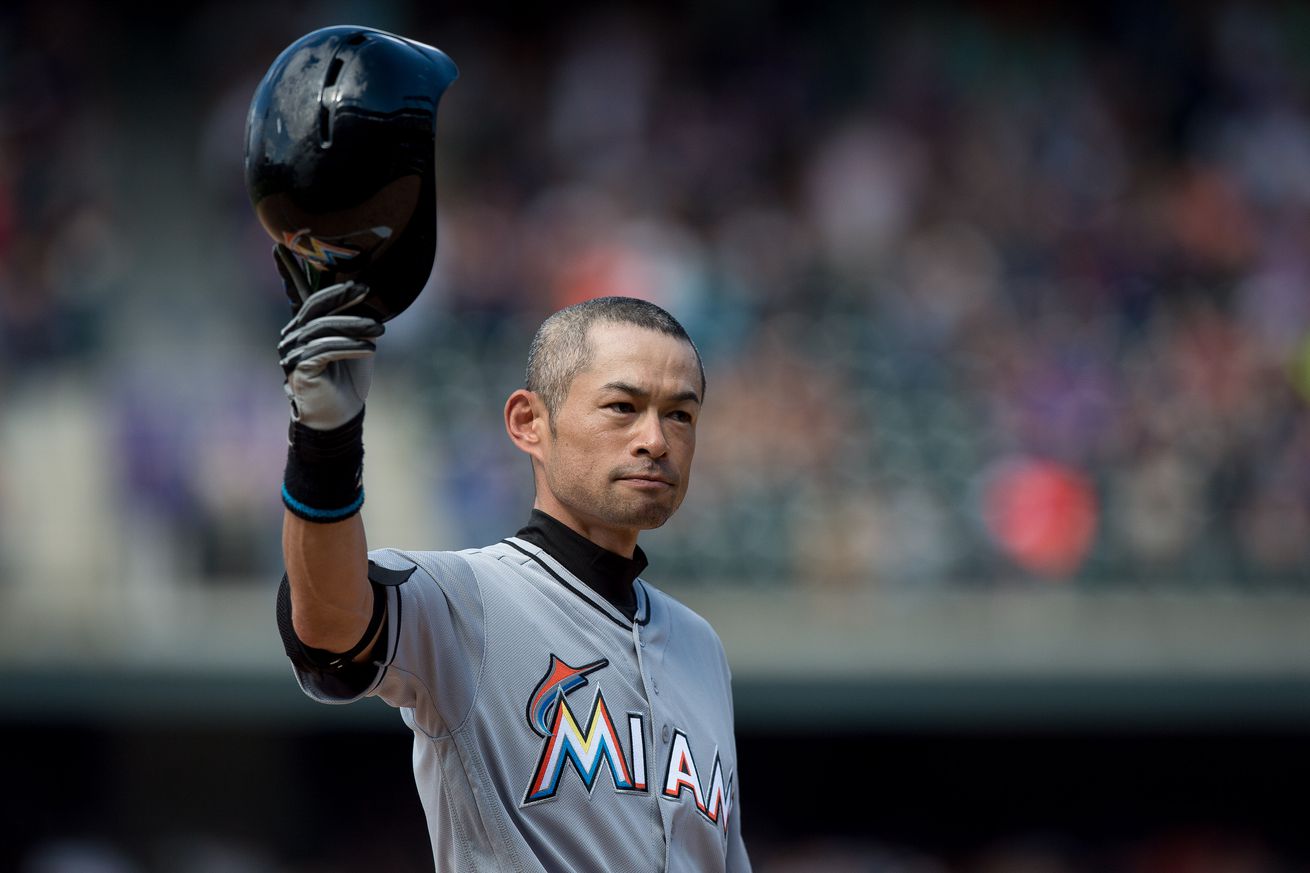 And once you combine what Suzuki did in Japan, he has 4,278 hits which are 22 more than Pete Rose who holds Major League Baseball’s all-time record for hits. But whereas Rose is baseball’s hit king, Suzuki is the game’s emperor of hits.

Suzuki’s style of swatting at the baseball has frustrated pitchers in two different parts of the world, and when he gets on base, the fun is just starting as he is still a threat to steal bases even at this point of his career.

Suzuki’s uniform is already in Cooperstown at the Baseball Hall of Fame after he surpassed Sisler in 2004, and the next thing that you can prepare for is his plaque that will one day line the exhibit there. There has never been a player that has gotten unanimous passage to the Hall of Fame as Griffey Jr. came the closest this year with 99.3% of the vote. And just like it will be for Suzuki’s former Yankees teammate in Derek Jeter and Griffey Jr., you can expect the Japanese native to have an easy passage to Cooperstown.

Suzuki will be the first Japanese born player to receive such as honor, but he has put that nation on his back from his first day on the job in Major League Baseball as the Land of the Rising Sun will definitely flock to Cooperstown to support their native son. And go figure that before Griffey’s induction, the M’s had never had a player wear their hat into Cooperstown. But pretty soon Griffey will have company with Suzuki.