Back Into The Pile

Previous Next
Back Into The Pile

The Los Angeles Rams took the field this past Sunday at Mercedes Benz Stadium for Super Bowl 53 extremely confident that they would be headed home in possession of the Vince Lombardi Trophy. And rightfully so as the Rams had a ferocious defensive line, a young quarterback in Jared Goff who is coming into his own as well as a head coach in Sean McVay who is wise beyond his years at the age of 33. By some observers the Rams were viewed as being the next dynasty of the National Football League and a win in the Super Bowl would be their coronation. However the Rams were unable to overcome the NFL’s current dynasty in the New England Patriots. And when Los Angeles left the field at the end of the game, not only did they fail to claim the Lombardi Trophy, but they also become the first team in Super Bowl history since the Miami Dolphins in Super Bowl VI to fail to register a touchdown.

After the Rams won the coin toss, they elected to defer to the second half which appeared to be a recipe for disaster since the Patriots score a touchdown after receiving the opening kickoff in their first two playoff games this year. But when the Patriots got into scoring position, the Rams defense dialed up a blitz that resulted in New England quarterback Tom Brady throwing an interception to Los Angeles linebacker Corey Littleton. It appeared that the Rams were in business as their defense handed the football to an offense which had averaged 33 points per game during the regular season. But all game long the Rams offense operated as if it was stuck in traffic on Interstate-405. 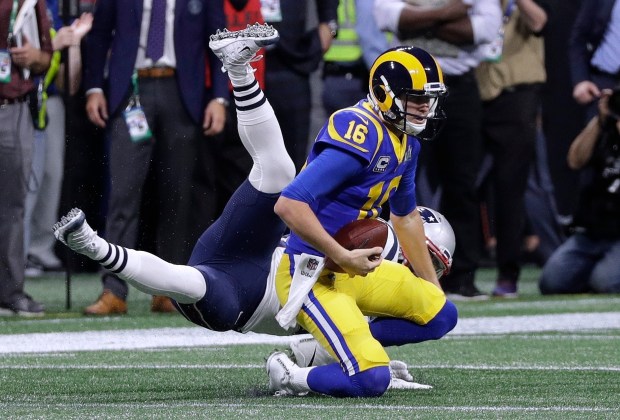 For the entire game the Rams were only able to convert three third-down scenarios, while they only accumulated 14 first first downs for the game. The young Goff played like a deer whose eyes were in the headlights as Patriots head coach Bill Belichick cooked up a defensive game plan that left the signal caller perplexed. All game long Goff never knew where the Patriots were bringing pressure from as we had not seem him perform this poorly since his rookie year of 2016. Goff would finish the game 19-of-38 passing for 229 yards with an interception, while failing to throw a touchdown pass. Goff was also sacked four times by the Patriots defense, but that number could have easily been eight as New England’s defensive line was all over him like a cheap suit throughout the contest. And when Goff was finally able to get a pass off, his wide receivers had to deal with a Pats secondary that was not giving them space to breathe.

It was a tremendous game plan that Belichick concocted as he took away the Rams powerful rushing attack by limiting them to just 62 yards as he dared Goff to beat him with his arm, and he couldn’t. It also didn’t help Goff’s case that McVay was unable to match the coaching genius of Belichick as he was unable to make the necessary adjustments in order to solve the Patriots defense which had to be frustrating for a Rams defense that was doing their part to keep the game close.

For three quarters the Rams limited the great Tom Brady to just three points, while the New England offense didn’t have one trip to the red zone. The Patriots however were able to have some success throughout the first three quarters in regards to being able to running the football, and by the time that the fourth quarter began, the Rams defense was operating on fumes. New England was beginning to find big holes in the middle of a fatigued Rams defense which made Brady’s job in pocket to throw the football much easier. Brady would lead the Patriots on a pair of scoring drives in the fourth quarter that resulted in 10 points which put the game on ice as New England only needed 13 points to claim their sixth Super Bowl Title.

This Super Bowl loss should serve as a learning tool for the Rams in regards of being able to seize the moment as getting to the big game is not something that should be taken for granted.

This past season saw Rams owner Stan Kroenke push all of his chips to the middle of the table in regards to winning. The Rams signed players such as defensive tackle Ndamukong Suh to one-year deals, while the acquisitions of cornerbacks Marcus Peters and Aqib Talib would see Los Angeles part with draft picks. The Rams also know that Goff will be coming up for a contract extension soon, and once you factor in that running back Todd Gurley as well as defensive tackle Aaron Donald recently received long-term deals from Los Angeles, this team is headed for cap purgatory which means that many of the players who took the field wearing blue and gold this past Sunday will not be back next season.

The Rams must also deal with the notion that in spite of not being able to win the Super Bowl that they will still the hunted and not the hunter for next season as their opponents will view them as their litmus test. Since 1998, the only NFC team to make consecutive Super Bowl appearances are the Seattle Seahakws who did it in 2013 and 2014. And over that stretch nine of those clubs have failed to reach the postseason in the following year altogether. The Rams have that on their plate along with having to deal with a New Orleans Saints team that is still irate over a non-call for pass interference on Los Angeles defensive back Nickell Robey-Coleman in the NFC Championship Game that played a big part in decided the outcome of the contest.

So far as head coach of the Rams, McVay has dealt with every challenge he’s faced head on. At the age of 31, McVay had to earn the respect of his team, while also being able to change the losing culture that plagued the Rams going back to their days in St. Louis. McVay also had to develop Goff, while getting things going for the Rams in a new city. But now McVay must find a way to get this team to avoid the dreaded Super Bowl hangover heading into next season as the talent is there for them to make another run if can they find a way to put this Super Bowl loss behind them.

Not every team in the National Football League has the mental makeup of the Patriots as they were able put last year’s Super Bowl loss to the Eagles behind them in order to come back and win the big game this time around. McVay did briefly hang out with Belichick during Super Bowl week in Atlanta, and he might want to reach out to him once more in order to seeking advice in regards to getting back there as the Rams have shown that they can make the big game, but the task now at hand will be to make it once again, and ultimately winning it.