Previous Next
Rocked On Rocky Top

When Butch Jones became the head football coach of the Tennessee Volunteers in 2013, he vowed to return the program back to respectability. And by 2014, Jones had the Volunteers back in a bowl game. Each of the last two years saw the Vols go 9-4 with 2016 marking the first time since 2004 that they were able to defeat the Florida Gators and Georgia Bulldogs in the same year. But as good as 2016 was for Tennessee was which included comeback wins over Florida and Georgia, they still managed to underachieve. 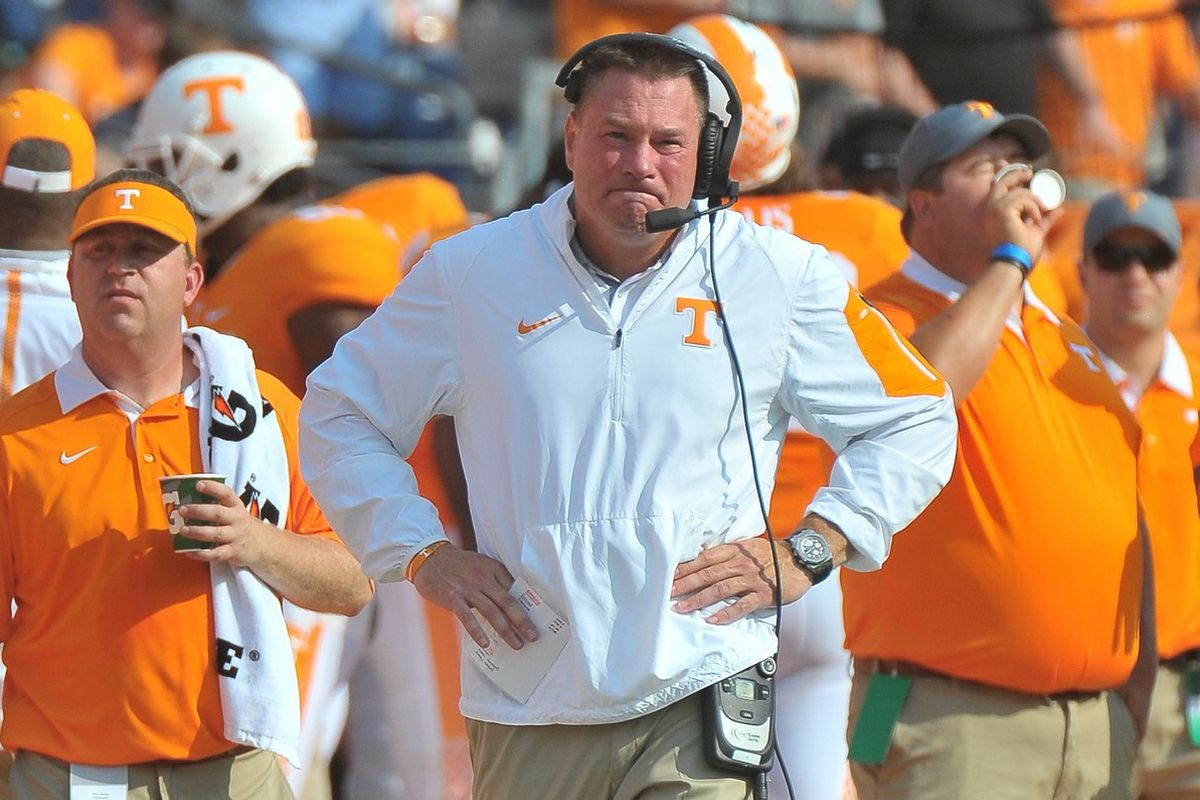 The Volunteers were expected to advance to the Southeastern Conference Championship Game which was only magnified after they defeated Florida and Georgia. However Tennessee would fail to win the SEC East as they lost four conference games which included losing to their in-state rival in the Vanderbilt Commodores. Tennessee would rebound to win their third consecutive bowl game, but there appeared to be something that was missing for Jones and his program. And that trip to the SEC Championship Game appears that is won’t be happening in 2017 either.

After five games Tennessee’s record is 3-2 and it actually could be worse. Only a failed two-point conversion by the Georgia Tech Yellow Jackets in the Volunteers opener prevented them from beginning the season at 0-1. Tennessee would lose their first Southeastern Conference game as they lost on a Hail Mary to Florida. The Volunteers would then have to sweat it out at home on September 23 versus the Massachusetts Minutemen who have yet to win a game in 2017, but that only paled in comparison as to what happened yesterday.

Tennessee was seeking to win their third straight game versus Georgia, but they got more than they bargained for. The Vols were embarrassed as the hands of the Bulldogs as they lost at home 41-0.In the contest Tennessee was only able to muster one first down as they were dominated in each phase of the game.

At halftime the Vols were down 24-0 and they were booed off of the field at Neyland Stadium in Knoxville. The second half would not prove to be any better for Tennessee as the Dawgs continued to pile it on with 17 second half points. For the game Tennessee was limited to just 142 yards of total offense, while they allowed Georgia’s running game to produce 294 yards on the ground versus them.

This marked the first time since 1994 that Tennessee was shutout at home and this marks the ninth time in the last ten years that they will begin 0-2 in the Southeastern Conference. And with Georgia looking like world beaters beaters so far in 2017, while Tennessee still struggles against Florida, the folks in Knoxville need not make any plans to visit Atlanta in early December for the SEC Championship Game as they have not won the SEC East since 2007.

Jones is earning more than $4 million this year and the folks in Tennessee are not thrilled to see their Volunteers consistently taking a backseat to Florida and Georgia, while they’ve also been unable to defeat the Alabama Crimson Tide in their last ten meetings.

Jones was supposed to be the guy who was going to return Tennessee to what the program was in the 1990’s when they were a national title contender, but instead the folks in Knoxville have been relegated to being happy if the Vols are able to get past Vanderbilt. Tennessee has been able to send its fair share of players to the National Football League over the years which includes quarterback Peyton Manning and tight end Jason Witten as that has helped Jones in recruiting being that he has several highly ranked recruiting classes under his belt at Tennessee. However Jones has failed in regards to developing those players which is why the Vols have been unable to keep with the likes of Florida, Alabama, and Georgia in the Southeastern Conference. Jones has once again made Tennessee respectable, but they still have plenty of work ahead of them if they are going to be able to win the SEC East which is not a strong division.

Tennessee is off next week before they host the South Carolina Gamecocks on October 14. Tennessee will then travel to face the Crimson Tide who are the top ranked team in the Associated Press Poll, and as of right now that game has the makings of producing an outcome similar to what we saw yesterday from Tennessee against Georgia. And if that is the case, the fate of Jones might be sealed. The folks in Knoxville still consider Tennessee to be a coaching job due to the fact that their facilities are second-to-none, but is this still a top-tier job?

It will be a miracle for Tennessee to finish the regular season at 8-4 which may not be enough for Jones to save his job as a beat down by Alabama appears to be on the docket. The Volunteers program still has their work cut out for them in order to consistently compete with the top teams in the Southeastern Conference, and Jones may not be the guy to get it done.