Since Jeffrey Loria has owned the Miami Marlins franchise, they have been an organization that is loaded with potential only to see it typically untapped. After the Marlins won the World Series in 2003, they were expected to remain in contention as they had a relatively young team. But after the Marlins went 83-79 in 2004 and 2005 respectively, Loria had a fire sale that was reminiscent of the one that the Marlins had after they won the World Series in 1997. Since 2005, the Marlins have only had two winning seasons which is a reflection of the poor leadership of Loria. And Instead of Loria being committed to the Marlins, his self-absorbed attitude is hurting both the Marlins as well as the people of South Florida who deserve more out of their Major League Baseball franchise.

Tonight the Marlins are set to host the Major League Baseball All-Star Game for the first time in franchise history. In recent years hosting the All-Star Game has been unofficially deemed as a reward for franchises that have either built brand new stadiums, or have had extensive renovations to their current venue. Marlins Park opened for business in 2012 amid controversy as the project to build the stadium in Miami barely had enough legislation to pass. In order to get his stadium plans approved, Loria promised to inject money into his franchise in regards to team payroll which is something that they typically haven’t done. The Marlins would actually be active in free agency as they signed the likes of shortstop Jose Reyes and starting pitcher Mark Buehrle, while also naming Ozzie Guillen as their new manager following the conclusion of the 2011 Major League Baseball season. However after the Marlins only won 69 games in 2012 to finish in last place in the National League East, Loria had another infamous fire sale which included trading longtime infielder Hanley Ramirez to the Los Angeles Dodgers. And as Loria had a new stadium with a small payroll, the people of Miami had been duped into building a luxurious stadium for a billionaire.

It’s has not gotten better for the Marlins since then as they’ve never been a contender during this decade, while there was also the tragic death of starting pitcher Jose Fernandez last September. But now there are reports that Loria could be on the verge of selling the Marlins.

Loria not being involved with the Marlins would be a good thing for the franchise as well as the people of South Florida, but a sale of the franchise is scheduled to fetch more than $1 billion on the market which would be a huge return on investment for a man who purchased the franchise for $158.5 million 15 years ago. And to add insult to injury if Loria were to sell the Marlins, the folks in Miami will still be footing the bill for a stadium that most of them have never visited, while a billionaire gets wealthier on an investment that he never cared about in the first place. 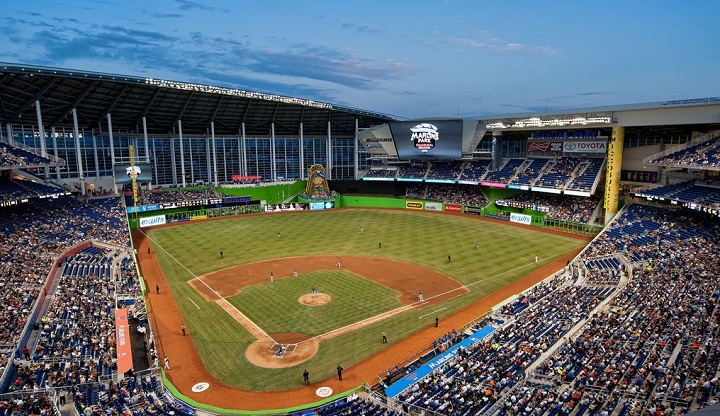 We can expect to see one of the largest crowds in the history of Marlins Park tonight when the National League takes on the American League, and it is also a shame that the largest crowd to this point in the history of the stadium had nothing to do with the franchise. An opening round game in the World Baseball Classic this past March saw 37,446 fans pack Marlins Park to watch the United States take on the Dominican Republic. But the team who calls Marlins Park home for the entire Major League Baseball season has only averaged roughly 21,000 fans per game since the park opened in 2012 which is a reflection of the team’s performance on the field as well as the leadership or lack thereof by Loria.

So now after tonight’s All-Star Game, Marlins Park will go back to being a ghost town. Loria will continue to count his stacks of cash which included price gouging for this week’s festivities at Marlins Park. And that pile will be even bigger if Loria is soon able to find someone to purchase the franchise that he never cared about in the first place.

Loria is not the first professional sports franchise owner to do what he has done, and he won’t be the last as there are only a select few professional sports franchise owners who actually care about winning, along with the fans instead of their bottom line which is making profit. And instead of becoming a beacon for baseball in South Florida, Marlins Park has become another luxury eye sore that was paid for by people who cannot afford to attend events there in order to benefit a man who has a vault like that of Scrooge McDuck: However the only thing is that this nightmare is an actual reality in Miami.