The Shifting Landscape Of The Big 12

Previous Next
The Shifting Landscape Of The Big 12

When the Big 12 Conference was formed in 1996, it immediately became an elitist league for college football with the Nebraska Cornhuskers, Colorado Buffaloes, and Oklahoma leaving the Big 8 Conference, while the Texas Longhorns left the Southwest Conference to help form the new league. From the first day of existence, the Big 12 provided quality football which was illustrated by the Longhorns upset of Nebraska in the inaugural Big 12 Championship Game which prevented the Cornhuskers from repeating as national champions. But even with some of college football’s blue bloods calling the Big 12 home, there has been one program that has been head and shoulders above the rest.

The Sooners have been the face of football in the Big 12 as their 10 conference crowns are by far the most of any program in league history. And when you think of Oklahoma’s dominance, it doesn’t take that long before you begin to think about Bob Stoops.

After helping the Florida Gators win the national championship in 1996 as their defensive coordinator, Stoops became a hot commodity on the coaching scene in college football. And in 1999, Stoops was charged with turning around an Oklahoma program as their head football coach after they had fallen on hard times.

The Sooners were coming off of three consecutive losing seasons for the first time since 1924 and had actually become an afterthought in college football which was shocking once you factored in their rich history that included six national titles. 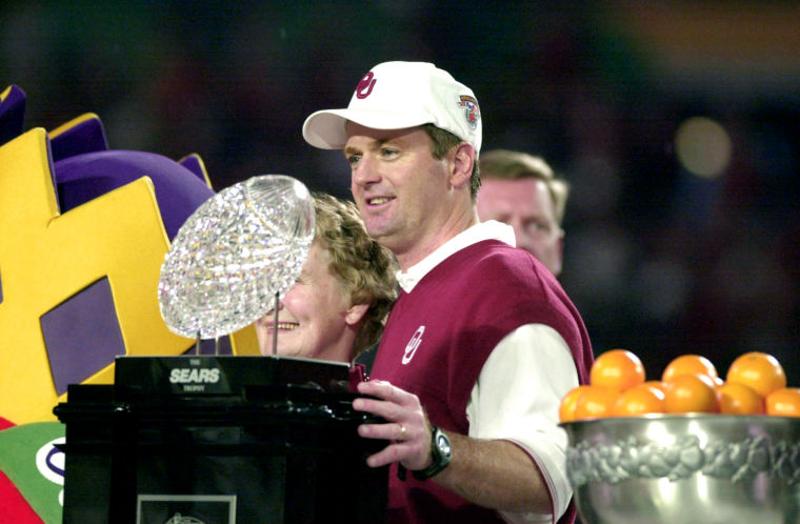 But it wouldn’t take Stoops that long to give Oklahoma stability as after the Sooners went 7-5 under him in his first season to make a bowl appearance, the Sooners used that a stepping stone for bigger things. And in 2000, Stoops had led Oklahoma to a national championship with a victory over the Florida State Seminoles in the Orange Bowl. The turnaround was not supposed to be that quick, but the age of 40, Stoops and Oklahoma were on the national scene.

Oklahoma wouldn’t slow down after winning it all as they continued to be one of the top teams in the Big 12 and a national power. Since Stoops came aboard Oklahoma has never had a losing campaign while only three seasons have gone by without them not finishing ranked in the top 25 of the Associated Press Poll. Under Stoops, the Sooners have won 10 Big 12 Titles, while playing for the national championship three times after they won it all in 2000. Since Stoops took over at Oklahoma, they’ve had 14 years where they’ve won at least 10 games which included going 11-2 in each of the last two campaigns as that featured a trip to the College Football Playoff in 2015, and a Sugar Bowl victory over the Auburn Tigers this past January.

And with the 2017 college football season set to begin in less than three months, the Sooners are poised for another national title run as they are one of the favorites to win the Big 12. But Stoops shocked the college football world when he made the announcement yesterday that he is stepping down from the post the he has manned for the last 18 years. 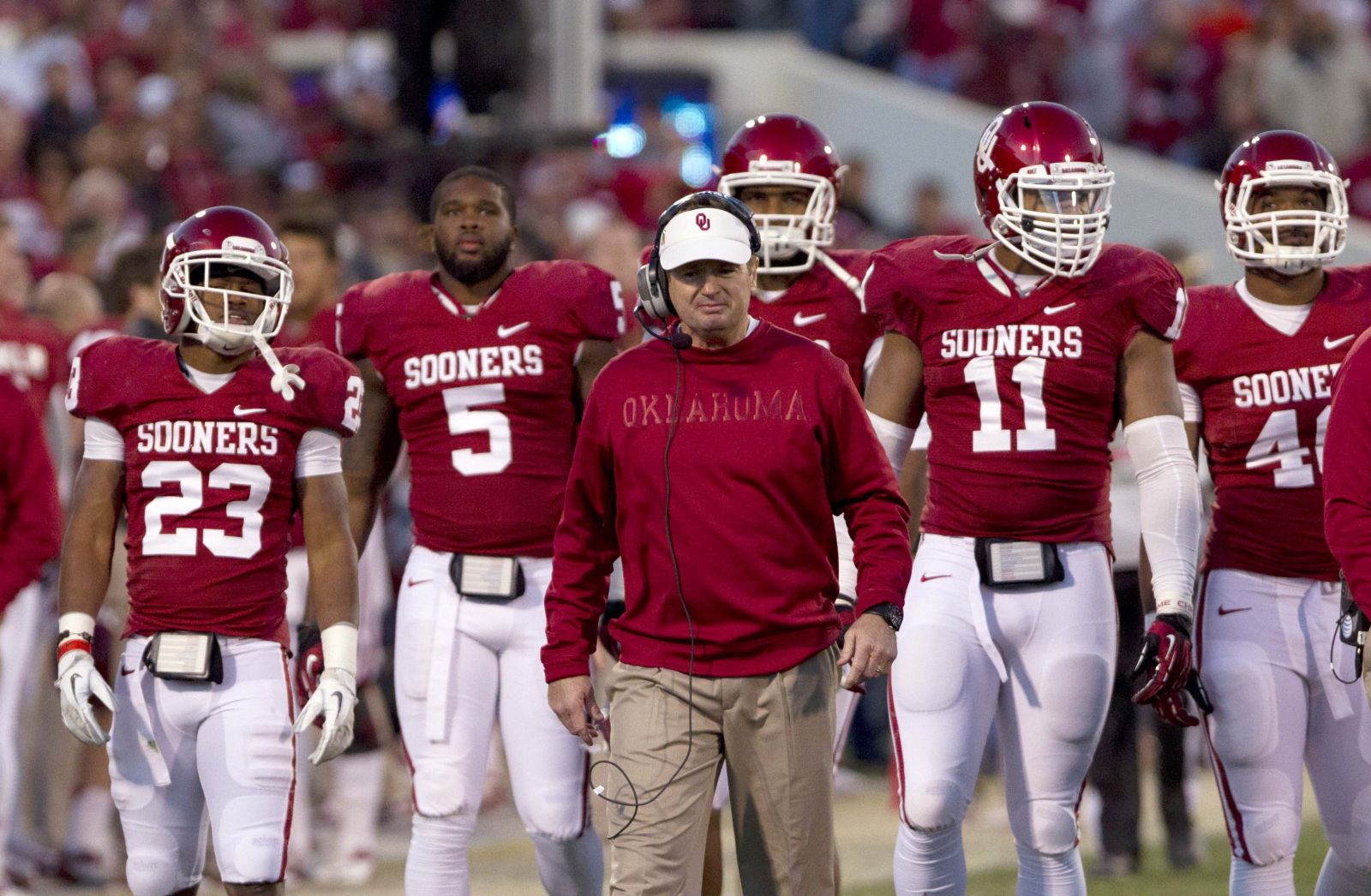 In 18 years at Oklahoma, Stoops compiled a record of 190-48 as his teams only suffered nine home losses. Stoops knew how to win the important games as under him Oklahoma was 11-7 versus Texas in the Red River Rivalry, 14-4 against the Oklahoma State Cowboys in the Bedlam Series, and 6-2 versus Nebraska before they left to join the Big Ten Conference in 2011 which included a pair of victories over their rivals in the Big 12 Championship Game. Under Stoops the Sooners got back to being able to hand pick the top high school football talent in the nation to play there as he sent his fair share of talent to the National Football League. Current New Orleans Saints running back Adrian Peterson and Tampa Bay Buccaneers defensive tackle Gerald McCoy, along with former NFL players in safety Roy Williams and defensive tackle Tommie Harris are just a few of the athletes whom Stoops got ready for the next level. And as they were able to succeed in the NFL, it helped to keep the pipeline in Norman, Oklahoma going.

But even though that it definitely comes as a shock to see Stoops walk away from Oklahoma; especially with the timing of the decision, he is going out on his terms. There is never the right time to leave, but with reports surfacing that Stoops lost his father at the age of 54 who died while coaching, it could have possibly played into his decision being that he is 56-years of age.

Stoops is leaving a program that is one of the best in the nation and he won’t be remembered as a great coach that hung around too long. Stoops is handing over the reigns at Oklahoma to Lincoln Riley who has spent his last two years in Norman as the team’s offensive coordinator and quarterbacks coach. The timing of Stoops’ decision allows Oklahoma to retain their entire coaching staff and focus on the upcoming season. But Riley will have some big shoes to fill, while the Big 12 will never be the same.

Riley follows Stoops who raised the bar for excellence at Oklahoma and in the process returned the program to what it was under the likes of Bud Wilkinson, Chuck Fairbanks, and Barry Switzer. And as far as the Big 12 goes, they are losing their meal ticket.

The past six years have seen the Big 12 become a conference that is in turmoil as they lost the Texas A&M Aggies and Missouri Tigers to the Southeastern Conference, Colorado to the Pac-12 Conference, and Nebraska to the Big Ten. The Big 12 has held on by a thread and with the struggles for Texas since 2010, it has been the Sooners under Stoops who have had to carry the conference banner.

So now the other programs within the Big 12 can breath a sigh of relief as Stoops steps away which gives them a better chance to win, but it actually puts their conference closer to not existing than it already is as right now their is not a football program that can carry the league.

There are some who wouldn’t be surprised to see Stoops return to coaching at some point, while there are others who think that he is done. But as Stoops has two sons in high school, he’ll probably take the next few years to be away from coaching in order to spend time with his family. The coaching profession is a difficult one as it puts a strain on personal relationships, while the wear and tear of it can break someone down. And with that no one should question Stoops’ decision as after everything that he’s done for Oklahoma over the last 18 years, he has earned the right to walk away on his terms.