Few Have Done This

Previous Next
Few Have Done This

The Gonzaga Bulldogs came out of nowhere to make the Elite Eight of the NCAA Men’s Basketball Tournament in 1999. Gonzaga would lose to the eventual national champions in the Connecticut Huskies in the West Regional Final, but only by five points. The surge by Gonzaga would see their head basketball coach Dan Monson leave to become the head basketball coach of the Minnesota Golden Gophers which paved the way for assistant coach Mark Few take over.

For a decade Few was an assistant coach at Gonzaga and he has gone on to make the most of his opportunity at the tiny school in Spokane, Washington since he’s been running the show.

From 1999-2016, Gonzaga would reach the Elite Eight twice, while always being the team that nobody wanted to face as they became the nation’s top “bracket buster”. The Bulldogs would also earn the respect of the tournament’s selection committee as they periodically would receive a high seed in the tourney, but they were unable to get over the hump. In 2013, Gonzaga was the top seed in the West Region, but they fell in the second round to the Wichita State Shockers. 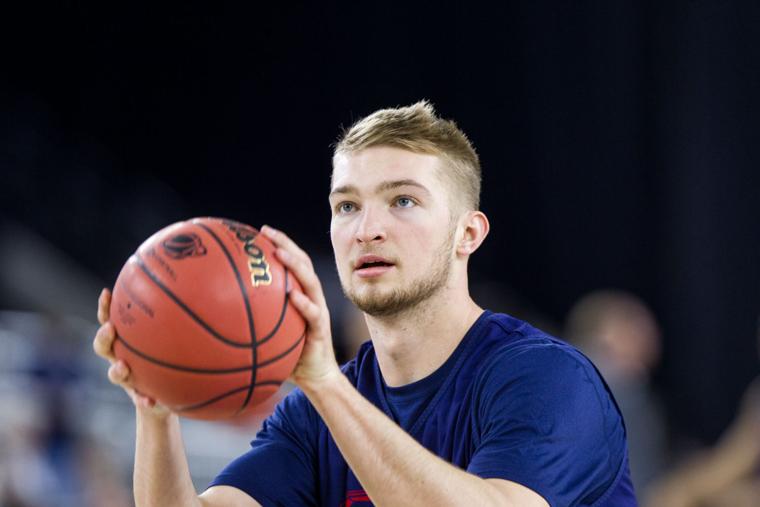 Success for Few and Gonzaga has led to him getting quality players going to Spokane as players such as forwards Robert Sacre, Adam Morrison, and Domantas Sabonis have gone on to play in the NBA. But even these players were unable to get the Zags to the Final Four. However 2017 has been the year where it has all come together for Gonzaga.

The Zags began this season ranked 14th in the Associated Press’ Poll as they were once again expected to be the team to beat in the West Coast Conference. And being that the WCC is not looked at as a power conference for basketball, Gonzaga has to always take care of their business in the non-conference portion of their schedule.

This season the Bulldogs would knock off the Florida Gators, Iowa State Cyclones, and Arizona Wildcats who all went on to make the NCAA Tournament which paved the way for them to steam roll the competition in the West Coast Conference.

The team that was expected to give Gonzaga the biggest problem within the West Coast Conference were the Gaels of St. Mary’s. However in three meetings this season which included the WCC Tournament, the Zags defeated the Gaels by a combined 51 points. Gonzaga only tasted defeat once this season as they lost at home to the BYU Cougars 79-71 on February 25. And when the loss occurred, Gonzaga’s skeptics wondered if they could beat out the Pac-12 Conference to get the top set in the West Region.

However the selection committee would reward the Bulldogs and give them the top spot in the West Region. Just like 2013, the Zags began the NCAA Tournament by playing in Salt Lake City, Utah. And after defeating the South Dakota State Jackrabbits by 20 points in the first round, they would meet an upstart Northwestern Wildcats team in the second round.

Northwestern had never made the NCAA Tournament prior to this in spite of the fact that their basketball program has existed since 1905. Northwestern’s tournament debut brought out their fan base in droves as there was a sea of purple in Salt Lake which included actress and alum Julia Louis-Dreyfus. 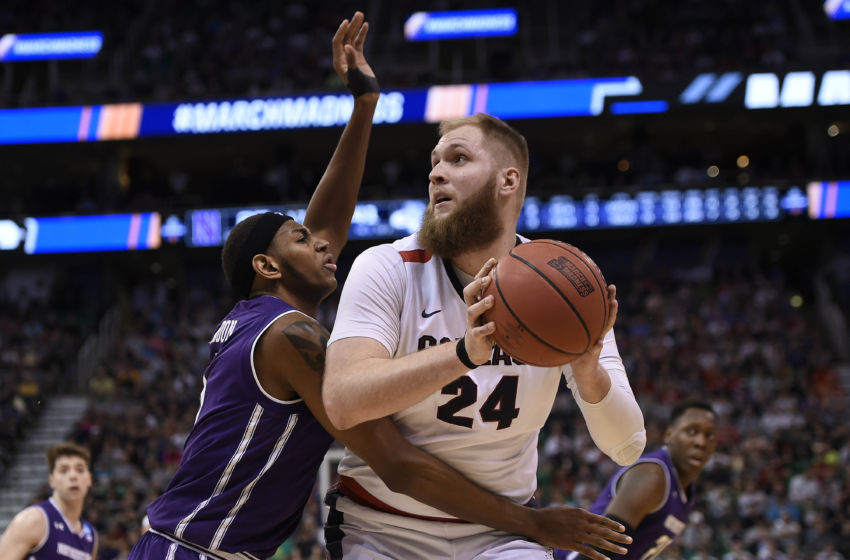 Gonzaga would race to an 18-point halftime lead and it eventually reached 25. But Northwestern would claw back into the game which saw the momentum shift to their side. And the tighter that the game got, the more that the fans in the arena shifted to the Wildcats. This was reminiscent of what we saw in 2013 at the same venue when Gonzaga was unable to overcome the surge of Wichita State. However this time Gonzaga would have enough to advance to the Sweet Sixteen as they defeated Northwestern 79-73.

The Zags would then travel to San Jose, California to meet the West Virginia Mountaineers whose full-court press was expected to give the Bulldogs some problems. But it was Gonzaga’s defense that answered the bell as they limited West Virginia to just 26% shooting and got the 61-58 win. And for the second time in the last three years, the Bulldogs were going back to the Elite Eight.

But unlike 2015 when Gonzaga had to deal with Duke who would go on to win the national championship, this time they had to hold off the upstart Xavier Musketeers. Xavier entered the NCAA Tournament as an 11-seed, but they didn’t play like it as they upset the Maryland Terrapins, Florida State Seminoles, and Arizona. Arizona was the team who was expected to give Gonzaga the biggest problem in the West Region, and with them eliminated, the Zags were off to the races.

Gonzaga took a 10-point lead to the locker room at halftime over Xavier and they never took their foot off of the throttle in the second half as they cruised to an 83-59 victory which will see them participate in the Final Four for the first time in school history as this is the cherry on the top for the work of Few.

Over the years bigger schools around the nation have attempted to lure Few away from Spokane, but to no avail as he is happy where he is at. Unlike some coaches who chase the money, Few has chosen to build a program at a school where there is no pressure. And although that there have been critics of Gonzaga when they’ve fallen short in the NCAA Tournament, they are eating some humble pie right now.

Make no mistake about it that Gonzaga won’t be intimidated of being on the big stage when they step on the court this Saturday at the University of Phoenix Stadium in Glendale, Arizona to meet the South Carolina Gamecocks who are also making their first trip to the Final Four as both squads will be out to show that they belong. But for Few and his Zags, this is another opportunity to show that they are among the elite basketball programs in America in spite of the fact that they are not a traditional power.

You can expect former Gonzaga players such as Basketball Hall of Famer John Stockton along with his son David who played under Few, and countless others which includes Morrison, Sacre, and Blake Stepp to be in attendance as this Final Four appearance will be a culmination of their hard work and contributions to this program as current players such as junior guard Nigel Williams-Goss who leads the team in scoring at 16.7 per contest and senior center Przemek Karnowski who gives the Bulldogs a burly low-post presence will have the spirit of former players with them.

But for Few he is living the American dream as he and his team are a part of a Final Four in 2017 that represents the little guy. And Gonzaga winning it all would mark the second consecutive year in which a small Catholic school was crowned as national champions.