Last year’s American League Divisional Series between the Toronto Blue Jays and Texas Rangers was an intense playoff series. After the Blue Jays dropped the first two games of the series at home, they would win the next two games on the road to force a decisive fifth game in Toronto. The game was an intense contest that would ultimately be decided in the bottom of the seventh inning when Rangers shortstop Elvis Andrus committed three errors. This would open the door for a four-run inning for the Blue Jays which was capped off when outfielder Jose Bautista launched a three-run homer that brought the folks at the Rogers Centre to their feet. But Bautista’s home run would also bring the Rangers to their feet as they were offended by his initial gesture after hitting the homer. Before proceeding around the bases, Bautista would stare at the Rangers dugout and then slam his bat down in their direction. This would see both benches clear before cooler heads prevailed. The Blue Jays would go on to win the game, and the series, but Bautista’s gesture would be something that was on the minds of the Rangers heading into 2016.

The Jays and Rangers each entered the 2016 Major League Baseball season as playoff contenders which put more importance on their meetings. After the Blue Jays took three out of four games from the Rangers in Toronto in early May, these two clubs would meet later on that month, but in Arlington.

There was peace between both teams until the eighth inning when of the series finale when Bautista was hit by a pitch from Rangers relief pitcher Matt Bush which was celebrated by the fans in Arlington. Later on in the inning, Bautista found himself trying break up a double play a second place. And when Bautista arrived at second base, he encountered Rangers second baseman Rougned Odor.

Odor let his fist do the talking as he still had last October on his mind. And although that Bautista wasn’t ready to throw down with Odor, this led to a bench-clearing altercation between both clubs.

In Texas, Odor was hailed a hero as fans adored him and a restaurant there even offered him free barbecue for life after he delivered some chin music to Bautista. But Major League Baseball wasn’t thrilled with Odor showing off his boxing skills as they suspended him for eight games. Odor would appeal and his suspension was reduced to seven games, but the Jays wouldn’t get another crack at the Rangers in the regular season.

Coming down the stretch of the regular season, the Rangers separated themselves from the rest of the pack in the American League West as they were seeking their second consecutive division title. Not only did the Rangers win the A.L. West, but they also beat out the Boston Red Sox and Cleveland Indians for the best record on the Junior Circuit which meant home-field advantage in the playoffs.

The Blue Jays on the other hand found themselves in a grueling battle with the Red Sox, Baltimore Orioles, and New York Yankees for the top spot in the American League East. But coming down the stretch it was the Red Sox who were able to distance themselves from the pack to win the division which left Toronto scrapping for a wild card berth.

In the season’s final weekend, the Blue Jays would secure a wild card berth and they were set to host the Orioles in the American League’s Wild Card Game. And just like the O’s and Jays did all year long, they would engage in an grueling battle that came down to the very end. In the bottom of the eleventh inning, Blue Jays first baseman Edwin Encarnacion would launch a three-run home run off of Orioles pitcher Ubaldo Jimenez to send Toronto to the American League Division Series. And the team that would be waiting for the Jays in the ALDS, would be the Rangers. 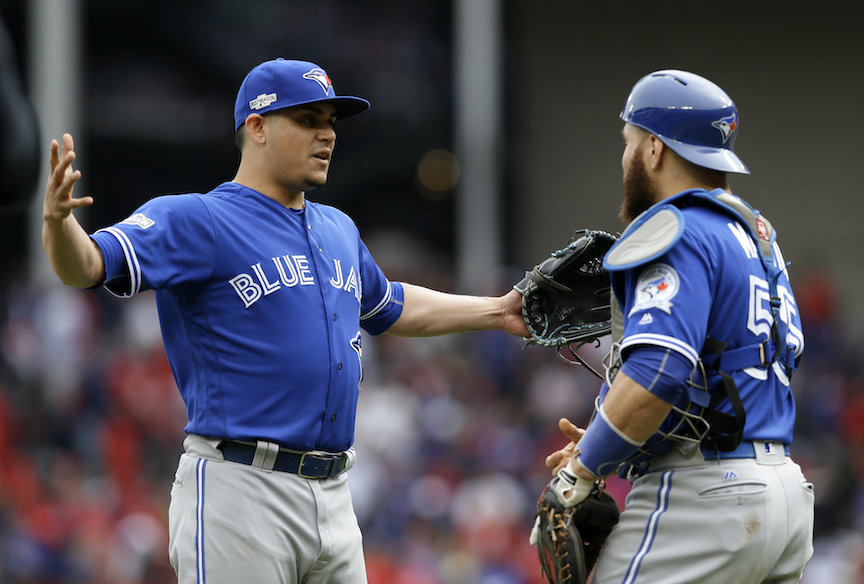 Most people expected another epic five-game showdown between these two clubs, but it was the Blue Jays that set the tone in Game One as they chased Rangers starting pitcher Cole Hamels in a 10-1 throttling of Texas. After the Blue Jays win, they had taken home-field advantage away from the Rangers, and in the process had won three consecutive road playoff games against them. But Toronto wasn’t satisfied as they beat the Rangers 5-3 in Game 2 which meant that they were headed home just needing to secure one win in order to advance to the American League Championship Series for a second consecutive year.

The Blue Jays headed into bottom of the first inning trailing 1-0, but they would quickly respond as Encarnacion hit a two-run homer, and catcher Russell Martin followed it up as he hit a solo blast. The Jays would build a 5-2 lead before the Rangers would mount a comeback which was led by Odor.

Odor hit a two-run home run in the fourth inning to cut the Texas deficit to one run as he didn’t have a problem playing the role of the villain in front of nearly 50,000 screaming fans in Toronto at the Rogers Centre. The Rangers would then take the lead in the sixth inning after a double by first baseman Mitch Moreland plated a pair of runs. But the Blue Jays would rally in the bottom of the frame when shortstop Troy Tulowitzki scored on a passed ball by catcher Jonathan Lucroy.  And just like the Wild Card Game against Baltimore, the Jays once again found themselves heading to extra innings in a game that would send them to the next round if they won. 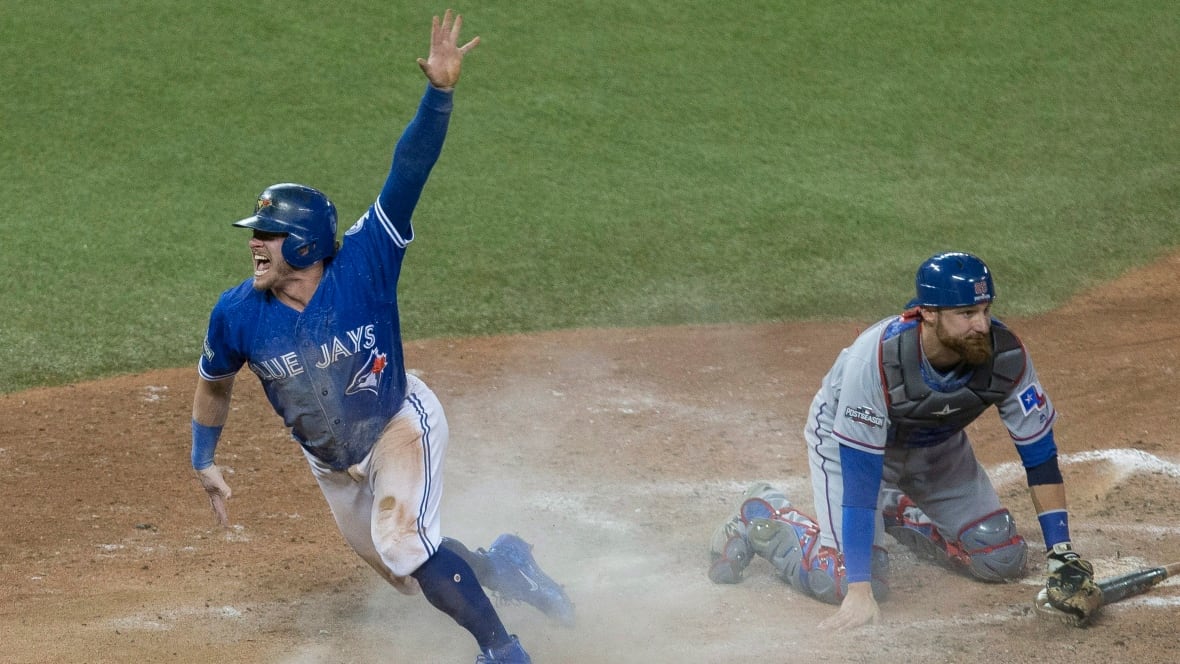 The game and the series would be decided in the bottom of the tenth when a 6-4-3 double play couldn’t be executed by the Rangers. Andrus’ feed to Odor who was covering second base was off which led to Odor making a bad throw to first base. Moreland couldn’t make the catch at first base as the ball got away from him which resulted in Blue Jays third baseman Josh Donaldson scoring from second base to end the series.

It was poetic justice for the Blue Jays as their victory was the result of the two players in Odor and Andrus that were at the center of the fight this past summer had to eat crow. And although that the Jays threw hands with the Rangers, they got their revenge in the postseason as they ended Texas’ postseason for the second consecutive year in a row.

The Rangers-Blue Jays rivalry doesn’t have the juice around Major League Baseball as those of the Chicago Cubs-St. Louis Cardinals, or the Yankees-Red Sox, but over the last two years these two clubs have met when all of the chips have been pushed to the middle of the table.

Bautista might not have been willing to get it on with Odor that afternoon, but his teammates had his back this October as the Rangers pitching staff never had an answer for Encarnacion who batted .417, or the Toronto bullpen that shut down their lineup which had been one of the best in baseball.

Toronto has now won six consecutive playoff games against the Rangers, and as they are prepping to face the Indians in the American League Championship Series, the Rangers are once again pondering what could have been as they won’t pick up the baseballs again to February when the Cactus League rolls around. And as Bautista will still be looked at as a villain in North Texas, he won’t have a problem wearing the black hat if it leads to a World Series Title.