Previous Next
Hamilton Versus Rosberg

As the old saying goes, the wolf that is climbing the mountain is always going to be hungrier than the wolf that is already at the top. But what if the wold that is at the top isn’t ready to relinquish his spot? Midway through the 2016 Formula One Season, there is a fierce battle going on between Nico Rosberg and Lewis Hamilton on the race track. Rosberg and Hamilton are two of the top drivers on the Formula One circuit with Hamilton being a three-time series champion. Hamilton has won the last two Formula One Championships with Rosberg being the runner up. Rosberg and Hamilton were childhood friends while they also are racing under the Mercedes banner. But don’t expect Hamilton and Rosberg to be exchanging recipes for beef wellington or bratwurst anytime soon as there is a war taking place each time that these “teammates” take the track.

When Hamilton clinched the 2015 Formula One Championship last year at the United States Grand Prix, Rosberg wasn’t overwhelmingly thrilled to see his teammate win as he wants what Hamilton has.

And when the 2016 Formula One Season began, it appeared that the wolf that was climbing the mountain was going to get what he wanted as Rosberg won the first four races on the season which dovetailed his strong finish in 2015 where he won the final three races. Rosberg’s strong start saw him putting some distance between himself and Hamilton in the driver standings for 2016 and it appeared that he was well on his way to first Formula One Title. But Rosberg’s advantage began to dissipate at the Spanish Grand Prix.

Hamilton was the pole sitter for the race with Rosberg second and things appeared ready for another one-two finish for Mercedes. However on the opening lap of the race, Hamilton and Rosberg collided and both cars were forced to retire which frustrated the race stewards and the powers that be at Mercedes. It appeared that Rosberg and Hamilton had kissed and made up, but the overall competitive fire in each driver would make that peace treaty appear to simply be window dressing.

Since the incident in Spain, Rosberg only has a single victory to his credit while Hamilton has three including the Austrian Grand Prix which took place this past Sunday. 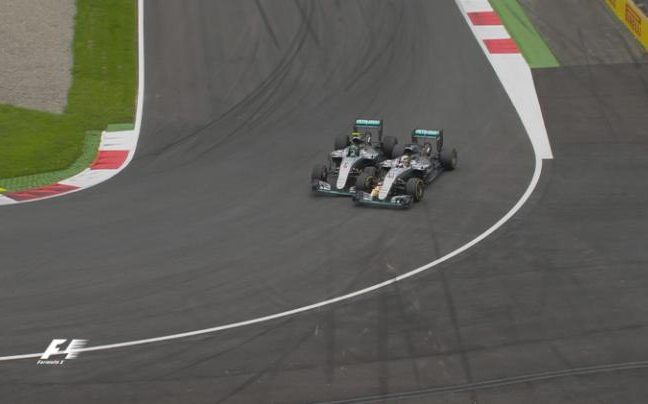 With two laps remaining, Rosberg had victory within his grasp and Hamilton was the frustrated driver as he felt that Rosberg was running on better tires for the rainy conditions. But as Rosberg was attempting to hold off Hamilton, the two drivers collided which led to Hamilton’s car going off of the course. However there was more damage that was done to Rosberg’s car which paved the way for Hamilton to win the race, while Rosberg was completely left off of the podium due to his fourth-place finish.

The crash between Hamilton and Rosberg led Mercedes team operator Toto Wolff to become frustrated in the pit area, and afterward he acknowledged that this behavior between the two drivers must stop. Hamilton’s controversial victory brought out the boo birds in Austria as race fans were not excited to see him get the win. Both Rosberg and Hamilton went as far to point fingers at each other, while Mercedes went into full cover up mode and cited a brake issue with Rosberg’s car.

But at this point Mercedes is simply trying to put lipstick onto a pig if they believe that there is not an issue between each driver. The main problem is that there can only be one championship handed out at the end of the Formula One Season, and Rosberg is tired of living in the large shadow that Hamilton has cast. Make no mistake about it that Hamilton is the face of Formula One as he is the most popular driver on the circuit. Hamilton loves to party on both sides of the pond as he has been known to frequent big cities in the United States such as New York City. Hamilton’s popularity and buzz has been known to bring out the celebrities to the race course which was seen this past May when he won the Grand Prix of Monaco where Miami Heat power forward Chris Bosh and shooting guard Dwyane Wade, along with actress Gabrielle Union, and musician Justin Bieber were there to greet him at the finish line. And whereas Rosberg wants what Hamilton has, the defending champ isn’t willing to give it up which has resulted in the issues have spilling over to the track.

Luckily that neither driver have been seriously injured due to their follies on the track, but Hamilton and Rosberg could eventually due bodily harm to other drivers on the track as their aggression is going get someone hurt if it is not soon curbed.

Rosberg’s current contract with Mercedes expires at the end of the 2016 Formula One Season, and although it is likely that he re-signs, Ferrari is interested in his services as they are looking to close the gap on Mercedes.

After Hamilton won the Austrian Grand Prix, Rosberg’s lead in the driver standings was cut to just 11 points over Hamilton with 12 races remaining which should make for an exciting second half of the circuit. But Wolff and Mercedes must provide some serious intervention between now and the next race which is the British Grand Prix that will take place this Sunday at Silverstone. And whereas Hamilton got an icy reception this past Sunday, it won’t be the same if he were to win in front of thousands of fans that will be waving the Union Jack of his native Great Britain.

Just when people thought that there wasn’t any excitement on the Formula One circuit, they have a ringside seat to the battle of the titans between Hamilton and Rosberg where neither is ready to concede to the other.