The Pride Of Philadelphia

Previous Next
The Pride Of Philadelphia

From 2003-2012, the Philadelphia Phillies enjoyed one of the best 10-year runs in franchise history. The Phillies never had a losing season over that stretch as they won five National League Eastern Division Titles en route to winning the World Series in 2008. That era of Phillies baseball saw them led by a core of players that included starting pitcher Cole Hamels, first baseman Ryan Howard, second baseman Chase Utley, and shortstop Jimmy Rollins. But just like all good things, the Phillies run would come to an end in 2013 when they went 73-89 to finish in fourth place in the NL East. By 2014, the Phillies would finish in the basement of the division for the first time since 2000, and last year saw them lose 99 games for the first time since 1969. Entering 2016, the Phillies were expected to flirt with losing 100 games, but they are not sticking to the script.

Roughly six weeks into the 2016 Major League Baseball season, the Phils find themselves in third place in the National League East, but their record of 22-15 finds them just one game behind the Washington Nationals for first place in the division while they are also the first wild card team in the NL as they are way ahead of schedule as far as turning things around and once again becoming a contender.

The shift for the Phillies began last June when Andy MacPhail was brought in to be the team’s new president of baseball operations. MacPhail has a history of turning franchises around as he was the former general manager of both the Minnesota Twins and Chicago Cubs, while also being the former president of baseball operations of the Baltimore Orioles. And under MacPhail, the Twins won their only two World Series Titles in franchise history.

Macphail’s arrival in Philadelphia signaled the end of the tenure of Ruben Amaro Jr., as the Phillies general manager. Amaro took over a contending Phillies team for the retiring Pat Gillick in 2009 who was the team’s architect that led Philadelphia to a World Series Title in 2008. And whereas the Phillies were still a playoff team under Amaro, he had a propensity of giving players that were over the hill long-term extensions, along with failing to pull the plug on their tenures with the team. 74 games into the 2015 Major League Baseball season, Ryne Sanberg was fired as the manager of the Phillies as he was replaced by Pete Mackanin, while Amaro would be replaced by Matt Klentak. And the new Phillies brain trust began to revamp the team’s roster.

Whereas Amaro was reluctant to trade his aging veterans, things changed last year as Hamels was traded to the Texas Rangers, while Utley and Rollins were sent to the Los Angeles Dodgers. The Phillies would go 37-51 under Mackanin, but they were still able to somewhat salvage 2015 after they began 2015 with a record of 26-48 under Sandberg.

And just like the Phillies went all the way with a core of home grown players in 2008, we are beginning to see that philosophy take its course once more. 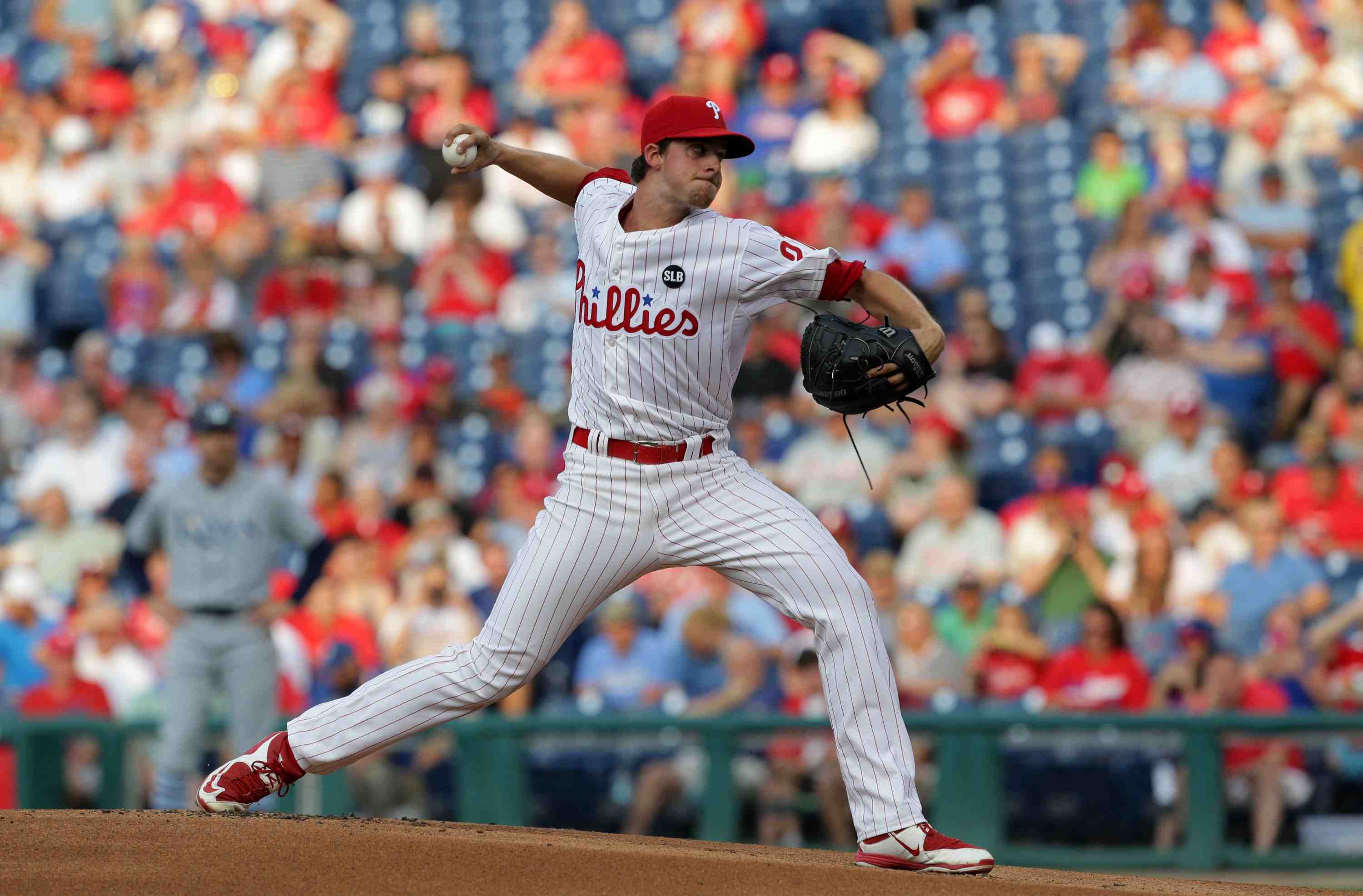 In 2014, the Phillies drafted starting pitcher Aaron Nola in the first round of the Major League Baseball Draft, and by 2015, he was set to make it debut with the big club. In 13 starts with the Phillies last year, Nola went 6-2 with an earned run average of 3.59 in 77.2 innings pitched. This season Nola is 3-2 with an earned run average of 2.89. But in just seven starts, Nola’s 58 strikeouts have him well ahead of his pace of the 68 the he recored in 2015. This past December, MacPhail pulled off quite a haul when he sent relief pitcher Ken Giles to the Houston Astros in a seven-player deal that included Philadelphia receiving the first overall pick of the 2013 MLB Draft in starting pitcher Mark Appel, and starting pitcher Vincente Velasquez. Appel is currently pitching for the Phillies Triple-A affiliate in the Lehigh Valley Iron Pigs, but for Velasquez, he has been a pleasant surprise in Philadelphia as he is leading the club in victories with 4 and in earned run average (2.70). And once you factor in that the Phillies acquired veteran starting pitcher Jeremy Hellickson over the winter from the Arizona Diamondbacks, they have the fifth lowest team earned run average of 3.74 in the National League, while they are sixth in quality starts with 20. The Phillies starting pitching staff has been been a pleasant surprise, and when Mackanin needs someone to close out games for his team, he can rely on relief pitcher Jeanmar Gomez who’s 14 saves currently lead MLB.

This Phillies pitching staff has carried this team as their offense is near the bottom of most statistical categories in the National League with outfielder Odubel Herrera being the only everyday player that is currently sporting a batting average north of .300. Howard is only batting .179, but his 8 home runs lead the club, while he is able to provide a wealth of leadership to the youngsters; especially since he is a former National League MVP.

What we’re seeing from the Phillies in 2016 isn’t a fluke as they are 4-2 against the Nationals, and 3-3 against the New York Mets as these are the two teams that alone were expected to duke it out for supremacy in the National League East this year. Whereas the Phillies still have Howard (due to his large contract which falls into the lap of Amaro), they are beginning to develop their youngsters which gives them plenty of promise for the future. And it isn’t hurting the Phillies that they are collecting some wins along the way.

There is still plenty of baseball to be played between now and when the postseason rolls around in October, but the Phillies have to be one of the more pleasant surprises here in 2016.