A Sad End For Boeheim

Previous Next
A Sad End For Boeheim 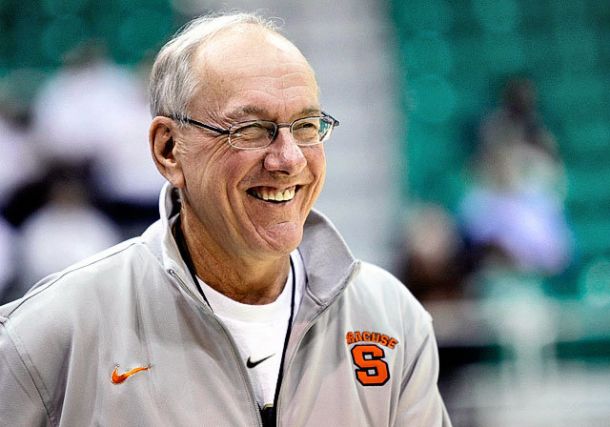 Under Boeheim, the Syracuse Orange would become a national power in college basketball. And when the Big East Conference was created in 1979, Syracuse would develop historic rivalries there with the Georgetown Hoyas and St. John’s Red Storm that would define the conference and college basketball as a whole. As an assistant and later as a head coach at Syracuse, Boeheim would be a part of five Final Four teams and the school’s only national championship team in basketball in 2003. Boeheim has sent numerous players to the NBA highlighted by power forward Derrick Coleman who was the first overall pick of the 1990 NBA Draft and current New York Knicks small forward Carmelo Anthony who was the Most Outstanding Player of the 2003 Final Four. But even Boeheim cannot escape the dark clouds that surround college athletics.

Recently Syracuse basketball was hit hard with sanctions by the NCAA. The NCAA stripped Boeheim of 108 wins while also reducing Syracuse’s basketball scholarships over the next few years due to a lack of institutional control mainly surrounding the team’s academics. Syracuse had already self-imposed a ban this year for any postseason tournament, but it wasn’t enough for them to avoid the dreaded NCAA hammer. Syracuse had vowed to appeal the NCAA’s sanctions and recently at a school function, Boeheim stated that he “wasn’t going anywhere”. But Boeheim got served with a harsh dose of reality as indeed he isn’t bigger than Syracuse.

Last week Boeheim announced that he will retire in three years in a decision that more than likely wasn’t solely his. Along with Boeheim, Syracuse athletic director Daryl Gross is resigning and he will be taking another position within the university which smells of the school desperately seeking to start fresh.

You can’t think about Syracuse basketball and not think about Boeheim as he is the blue and orange which is evident by the Orange’s basketball court at the Carrier Dome being named after him. Boeheim has done many tremendous things for Syracuse, but at the end of the day he is simply an employee that must answer to someone who signs the paycheck that he still waits in line to cash. When Syracuse announced its move from the Big East to the Atlantic Coast Conference in 2011, Boeheim was publicly critical of it as he loved his beloved conference. But after being spoken to about it by Gross, Boeheim would quickly sing a new tune and welcome a new journey down to Tobacco Road. And just like Boeheim still intended to be at Syracuse until he was ready to walk away, the decision was not his either.

Where there’s smoke, there is fire and just like Syracuse tried to distance themselves from longtime assistant basketball coach Bernie Fine a few years ago amid sexual abuse allegations, the only fall guys left this time were Gross and Boeheim.

The end is rarely that pretty for head coaches as they just like regular employees are typically unable to write their final chapter. Boeheim has done more good than he has bad, but his mistakes have expedited his retirement. And the jury will still be out on how Boeheim will be remembered.