The last four NBA seasons have seen the Miami Heat franchise soar to new heights. In the past four years the Heat claimed a pair of NBA Championships in four trips to the league’s final series. But things will be drastically different this time around as forward LeBron James left the Heat to rejoin the Cleveland Cavaliers. The departure of James leaves a big hole for the Heat as he led the team last season in points (27.1), rebounds (6.9), and assists (6.4). With the James departure, Heat team president Pat Riley had to get creative in fielding a team for the upcoming season.

Riley signed small forward Luol Deng to somewhat cushion the blow of losing James. For his 10-year NBA career, Deng has averaged 16 points and 6.3 rebounds per game. Deng’s numbers are nowhere near to what the Heat lost with James which means that power forward Chris Bosh will be the focal point of the Heat’s offense this season. When the “Big Three” of James, Bosh, and Heat shooting guard Dwyane Wade joined up in 2010 it was Bosh that was the forgotten player. Prior to joining the Heat, Bosh has averaged 20.2 points and 9.4 rebounds in the first seven years of his NBA career with the Toronto Raptors and you can expect him to go back to being more of a scoring threat this season. In originally joining the Heat, Bosh sacrificed some of his overall game for the greater good of the team and he was rewarded with a pair of NBA Titles. Now you can expect to see more of Bosh back in the post. 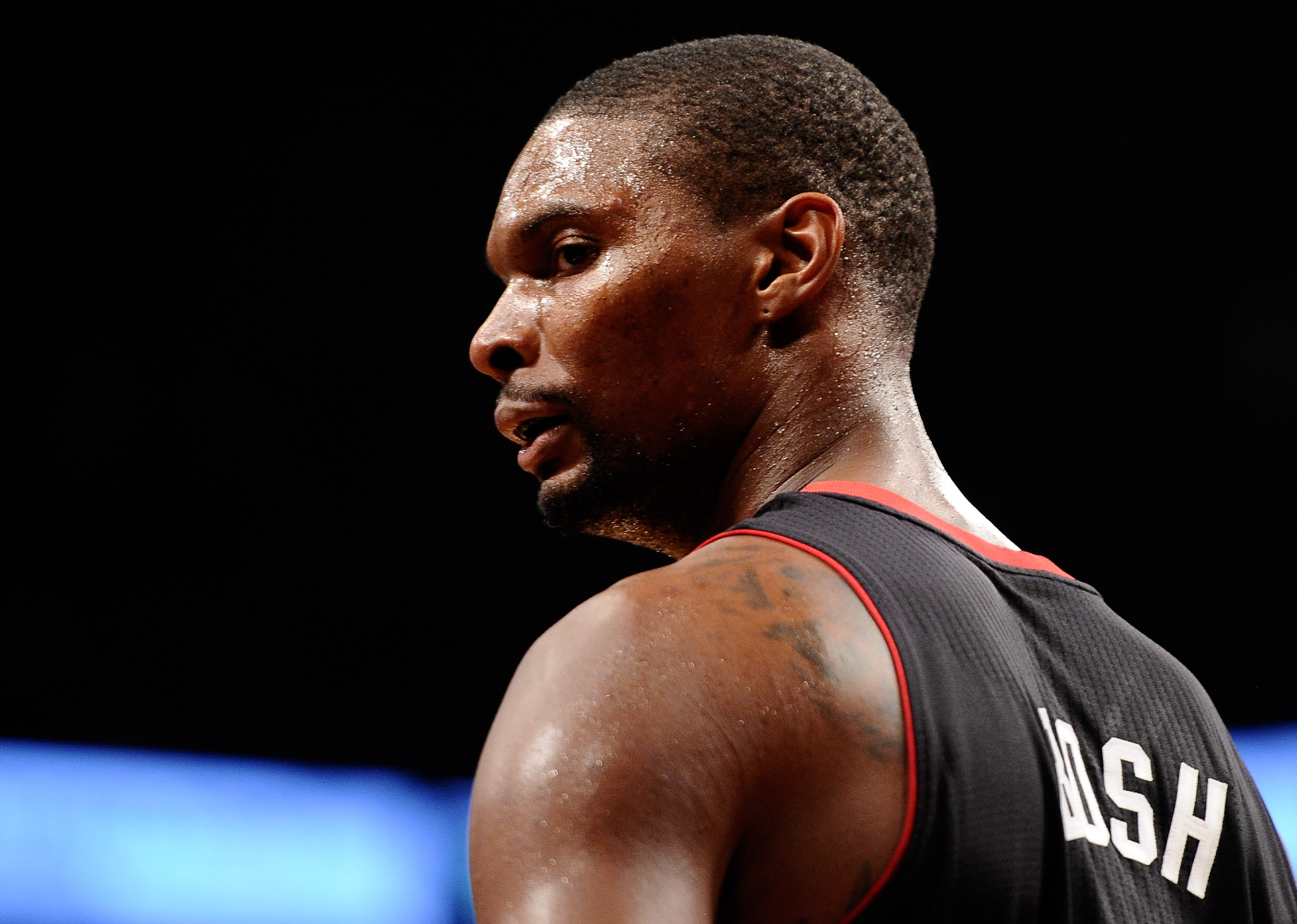 For Wade, he is 32-years of age and there are questions in regards to his knees. There has been a drop off in the overall production of Wade in the past few seasons. For Heat head coach Erik Spoelstra, he must monitor Wade’s minutes in order to keep him fresh.

With James’ superior ball handling in Miami for the last four seasons, the Heat were able to skate by without having a dominant point guard. But that will not be the case this season. Heat veteran point guards Norris Cole and Mario Chalmers combined to average 7.9 assists last season, but is either player ready to step up? If not, Riley and Spoelstra are high on rookie point guard Shabazz Napier who showed an uncanny knack of being a floor general in college at UConn and the Heat are hopeful that his transition to the NBA will be a quick one.

The Heat are no longer runaway favorites in the Eastern Conference, but for the players that remained they are out to show the world that it wasn’t just James that propelled them to four straight appearances in the NBA Finals.

Last season saw the Washington Wizards qualify for the NBA Playoffs for the first time since 2008. Under head coach Randy Wittman, the Wizards have a good blend of youth and veterans that should allow them to contend for the franchise’s first NBA Finals appearance since 1979.

The Wizards have a very explosive starting back court in point guard John Wall and shooting guard Bradley Beal. But the only knock on the duo is that they have been unable to remain healthy. Last season Wall played in all 82 games and is ready to go for this season while Beal is currently out as he is recovering from a wrist injury. What Beal and Wall give Wittman and the Wizards when they’re healthy is over 36 points of production. Beal and Wall also have tremendous ability to attack the basket while they’re good perimeter defenders.

Behind Wall, the Wizards have veteran point guard Andre Miller who has seen it all during his time in the NBA. Miller is entering his 16th NBA season and the Wizards are his sixth team in the league, but he commands a ton or respect from his teammates when he is on the floor.

The Wizards front court situation will be interesting this season. Last season center Marcin Gortat and power forward Nene Hilario combined to averaged 15 rebounds per game while each player can also score in the post. Behind Hilario and Gortat, the Wizards have a pair of veterans in power forwards Kris Humphries and Drew Gooden that have made careers for themselves in the NBA on their ability to crash the boards and you can expect more of the same this season. The Wizards lost starting small forward Trevor Ariza in free agency as he signed with the Houston Rockets, but they were able to lure veteran small forward Paul Pierce to Washington. Pierce is set to embark on his 17th NBA season and he brings a championship pedigree with him to the Wizards that includes winning the NBA Championship in 2008 as a member of the Boston Celtics. Pierce brings a toughness with him along with his ability to deliver in clutch situations. But mainly the Wizards will need to see improvement from small forward Otto Porter Jr. Porter Jr. was the third overall pick of the 2013 NBA Draft but he only averaged 2.1 points per game as a rookie while only appearing 37 contests without making a start and it is time for him to step up.

The Wizards may not dominate in the regular season, but what they are is a team that will be scary in the NBA Playoffs.

After a very interesting off-season the Atlanta Hawks are happy to get back to playing basketball. Racist remarks by the Hawks majority owner Bruce Levinson forced him to sell his shares in the team and it also resulted in general manager Danny Ferry taking an indefinite leave of absence which has shaken the team to its core. Now it will be up to Hawks head coach Mike Budenholzer to keep the ship righted in Atlanta.

Two out of the last three seasons have seen Hawks center Al Horford succumb early in the campaign to a season-ending injury. Horford is returning to the Hawks after tearing a pectoral muscle as he looks to regain his form in the post that has seen him average 14 points and 9.5 rebounds in his seven-year NBA career. In Horford’s absence last season, Hawks power forward Paul Milsap picked up the slack. Milsap averaged 17.9 points along with 8.5 boards and it is scary to think what these two can combine to be this year. Hawks point guard Jeff Teague is very underrated as his numbers continue to improve while shooting guard Kyle Korver still has one of the best strokes from beyond the three-point arc.

Sports can be therapeutic and in light of the controversy, the Hawks should come together and gel as the season progresses.

The buzz is literally back in Charlotte as the Bobcats have switched their team name to the Hornets. The original Charlotte Hornets left town in 2002 when they moved to New Orleans. In 2013, the New Orleans Hornets would change their team name to the Pelicans which paved the way for the name of the Hornets to be returned to Charlotte. The Hornets also have something to build off of as they made the playoffs last season under first year head coach Steve Clifford. The Hornets also return their top three scorers from last year which gives them optimism for the upcoming season.

Last season Hornets power forward Al Jefferson exceeded career highs in points and rebounds as he scored nearly 22 points per contest along with grabbing nearly 11 boards each game. Jefferson gives the Hornets a legitimate low-post threat and he can also score in a variety of ways. Prior to Jefferson’s arrival in Charlotte, Hornets point guard Kemba Walker had to carry the load offensively, but that is not the case anymore as he can freelance more. In the off-season the Hornets signed shooting guard Lance Stephenson and he will bring a much needed rugged attitude to Charlotte. For Hornets head coach Steve Clifford, he is hopeful that small forward Michael Kidd-Gilchrist will be able to take the next step in his game this season. Gilchrist was the second overall pick of the 2012 NBA Draft, but his overall game has yet to catch up with his sheer athleticism.

Under Clifford, the Hornets got a taste of the playoffs last year and they will look to capitalize on that this season.

The Orlando Magic are in the process of building a contender and it is going to take some time. Jacque Vaughn is entering his third season as the head coach of the Magic and he has only been able to compile a record of 43-121. This season it will be tough for him and Orlando to improve on that win-loss mark.

The Magic will field one of the youngest teams in the NBA this season and they will be without their leading scorer from a year ago in shooting guard Arron Afflalo who was traded to the Denver Nuggets in the off-season. Last season as a rookie, Magic point guard Victor Oladipo averaged 13.8 points per game along with 4.1 assists and Vaughn is hopeful that the youngster will continue to make progress while also becoming a better floor general. But Oladipo will begin the season on the sidelines as he is recovering from a facial fracture that he recently suffered in practice. The Magic used the fourth overall pick of the 2014 NBA Draft on power forward Aaron Gordon who has tremendous athleticism, but is ready to be an impact player in the NBA? Magic center Nikola Vucevic has ascended into being one of the league’s better rebounders while small forward Tobias Harris has become viable off of the bench as they both are building blocks for Vaughn and Magic general manager Rob Hennigan.

The fans in the Magic Kingdom will have to endure another season of dealing with the growing pains of the young Magic, but hopefully there can be some excitement sprinkled in here and there.