Previous Next
Don’t Doubt The Process 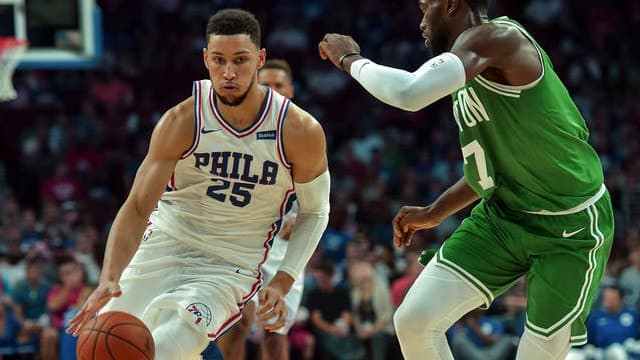 As the Eastern Conference Finals have kicked off, the team that many observers predicted would be participating in the series are watching from home. The Philadelphia 76ers fell to the Boston Celtics in the Eastern Conference Semifinals after a remarkable season. The Sixers saw a 24-game improvement in the win column from last year which included them winning their final 16 games of the regular season. Philadelphia earned their first playoff berth since 2012, while their 52 victories marked the best output for the club since 2001. But even in defeat, the Sixers showed that their future is bright as it is now important for them to build off of their playoff run and turn it into an NBA Championship sooner rather than later.

One big reason why the 76ers were successful this season was due to the fact that they were finally healthy. When the Sixers had a three-year stretch where they won a combined 47 games, it was largely due to the team’s former general manager Sam Hinkie consistently using first-round picks on players who were hurt. However those players were able to contribute this season, and the rest is history.

Point guard Ben Simmons was the first overall pick of the 2016 NBA Draft, but he missed the entirety of what was supposed to be his rookie campaign with a foot injury. Simmons enjoyed a solid rookie season with the 76ers as he averaged 15.8 points, 8.2 assists, and 8.1 rebounds. Center Joel Embiid was the third overall pick of the 2014 NBA Draft, and after injuries sidelined him for his first two years in the league, he was final able to show what he could during the 2016-2017 NBA season when he averaged 20.2 points, 7.8 rebounds, and 2.5 blocks in 31 games. However this was the first season where Embiid was able to remain healthy as he averaged 22.9 points and 11 boards as he’s put himself in the conversation to be considered as the NBA’s best big man.

The 76ers were able to finish third in the Eastern Conference in spite of the fact that they didn’t win the Atlantic Division as it was so competitive with the Toronto Raptors and Celtics in front of them. But Philly’s run to the playoffs, along with their first-round series win over the Miami Heat was able to ignite a fan base in the City of Brotherly Love that has been waiting for something to cheer about on the hardwood.

Now we see that the Sixers have the building blocks to win with head coach Brett Brown, Embiid, and Simmons. And it is time for the youngsters on this team to develop as their progress should entice some of the top free agents in the NBA to come to Philly.

All of the buzz this summer will be around Cleveland Cavaliers small forward LeBron James who is expected to opt-out of his contract this summer in order to once again test free agency. And as James will undoubtedly be looking to join a team that is championship ready, the young Sixers will surely be on his radar.

Aside from potentially going after James, the Sixers also have the tenth overall pick in the upcoming NBA Draft due to a previous trade which they made with the Los Angeles Lakers. And if Philadelphia doesn’t want to use the pick, they could use it in a trade in order to get another veteran player on their team in order to lure someone like James to Broad Street.

Embiid is the real deal as he can get 20 points and 10 rebounds on any given night as easy as most people can order a pizza, but one glaring weakness for this Sixers team is the perimeter shooting of Simmons. On the season Simmons only attempted 11 three-point shots, and he failed to convert on any of them. In the paint Simmons can do whatever he wants as it tough to defend a 6’10” point guard. And although that Simmons has the potential to be one of the greatest passers and facilitators that the NBA has ever seen, for he and the 76ers to take that next step, he must add a perimeter game to his repertoire. Simmons lack of a perimeter showed up the most during the Philadelphia’s playoff lost to the Celtics as Boston dared him to shoot from the outside, which turned into a four-on-five disadvantage for the Sixers. However the fact that Simmons now has one full year under his belt in the NBA, while he won’t become 22-years of age until this July is a huge positive going forward for Philadelphia.

And aside from having a pair of young studs in Embiid and Simmons, Brown is the right person to coach this team. When Brown became the Sixers head coach in 2013, he was caught up in Hinkie’s “Trust The Process” philosophy which didn’t result in that many victories for Philadelphia. But when Bryan Colangelo became the 76ers president of basketball operations in the summer of 2016, he stuck with Brown because he felt that he was a good coach who had not been given quality personnel to work with. And that belief by Colangelo in Brown has paid off as he is a solid coach that knows his X’s and O’s, while he has also shown the ability to relate to his young players, while also getting the most out of them.

Contract wise Philadelphia is in a very good position as they only have $70 million committed to player salaries for next season which will give them the chance to go shopping to add more quality players to the mix for next season. I expect the Sixers to attempt to re-sign shooting guard J.J. Redick who is a three-point shooting specialist, but I don’t foresee him getting $23 million per season like he was able to earn for this past season. And although that James coming to Philadelphia makes sense on paper, it’s no a slam dunk due to the fact he would have to check his ego at the door as there is one boss for the Sixers, and it is Colangelo.

For the first time in a very long time, there is hope for the 76ers, and I don’t see this team relinquishing what took them so very long to achieve which is respectability.