Previous Next
The New And Improved National League West

When you think about life in the National League West, the Los Angeles Dodgers and San Francisco Giants come to mind rather quickly as they are two of the most iconic franchises in Major League Baseball. Both the Giants and Dodgers have been playing baseball now for more than 130 years as their rivalry has spanned from the Big Apple to the Golden State. The Dodgers and Giants are typically the teams to beat in the N.L. West which is evident by their combined 11 division titles since 2000. However 2017 is shaping up to be a different year in the N.L.West.

Whereas the Dodgers and Giants were expected to be postseason contenders here in 2017, the same could not be said about either the Colorado Rockies or Arizona Diamondbacks. The Diamondbacks have not made the postseason since they last won the National League West in 2011, while you have to go back to 2009 to find the last time in which the Rockies made the playoffs, and they’ve never won the the division.

But as of today there is a battle going on to see who is going to be the new sheriff in town as it is the Rockies who are sitting in first place in the National League West with a record of 41-23, while the D-backs are three games behind them in third place. The Dodgers are right in the mix in second place as they are 2.5 games, while the wheels have fallen off of the Giants express as they’re currently struggling in fourth place and 15 games out. And for the first time in the history of the National League West, there is a strong possibility that three teams could reach the postseason from this division.

The Rockies have always been known for their offense as the high altitude and the thin air of the Rocky Mountains is always an advantage for them. But this year pitching is defining the Rockies as their team earned run average of 4.01 is fifth in the National League which is a far cry from last season when Colorado’s team earned run average of 4.91 was 13th. Led by rookie starting pitcher Antonio Senzatela who has 8 wins, the Rockies have three starting pitchers that already have at least 6 victories to their credit this season. 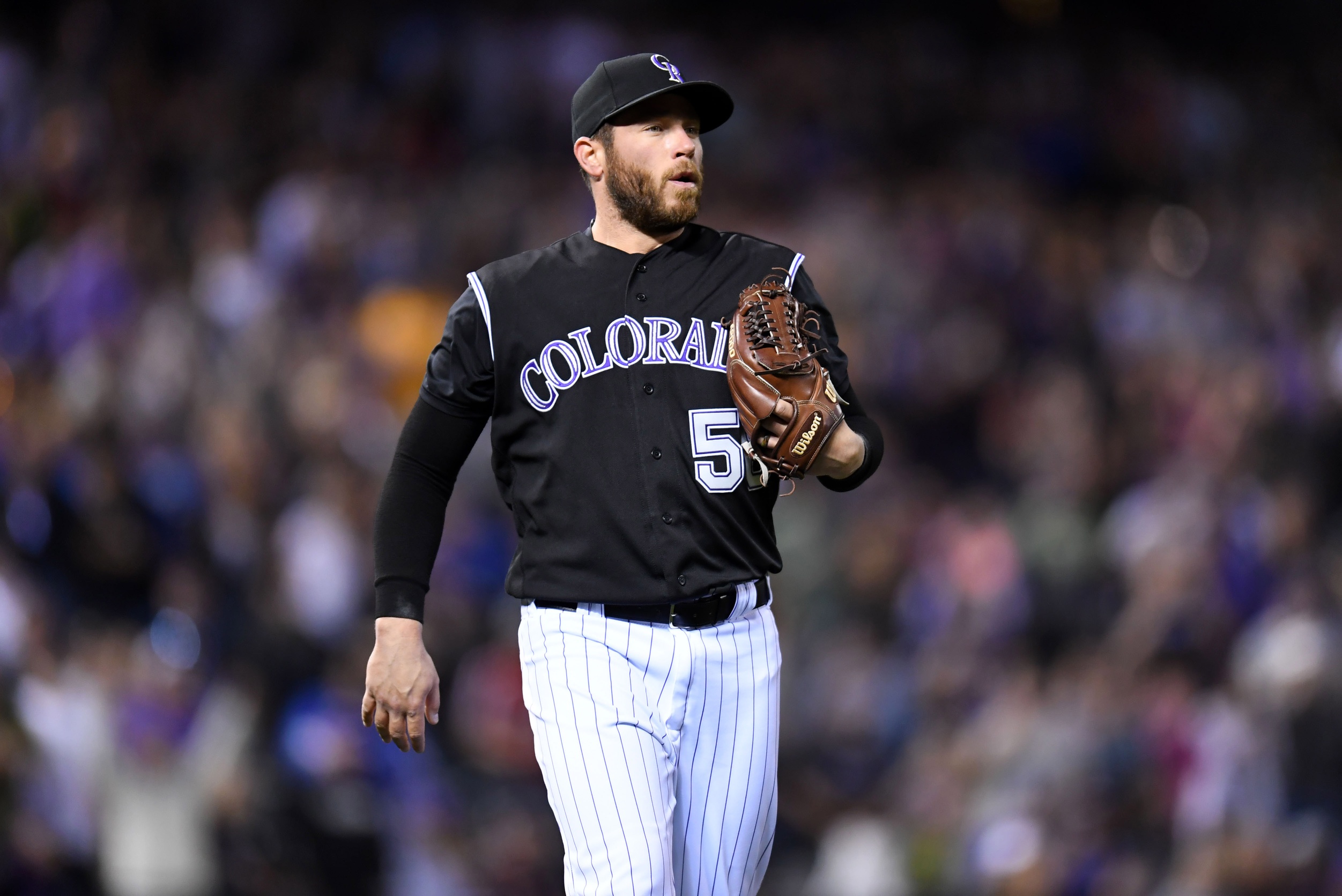 Relief pitcher Greg Holland is in his first season with the Rockies and he has quickly regained the form that made him one of the top closers in baseball a few years ago. In September 2015, Holland had to undergo the dreaded Tommy John surgery and he had to watch from the sidelines as the Kansas City Royals won the World Series without him. Holland would sit out all of 2016 as he was recovering and when he became a free agent this past winter, the Rockies took a flyer on him for a one-year deal for $6 million. And this season Holland’s presence is shortening the game for the Rockies pitching staff as his 23 saves are by far the best in Major League Baseball.

But even as improved as the Rockies pitching staff has been, you still cannot overlook their Murderers Row like lineup. The Rockies are maintaining their status as one of the best hitting lineups in Major League Baseball as only their 328 runs scored are second in the National League only to the 329 of the Washington Nationals. It’s the usual suspects in the Rockies lineup leading the way such as outfielder Charlie Blackmon and third baseman Nolan Arenado are each having solid campaigns, but they are also receiving a surprisingly positive contribution from first baseman Mark Reynolds. 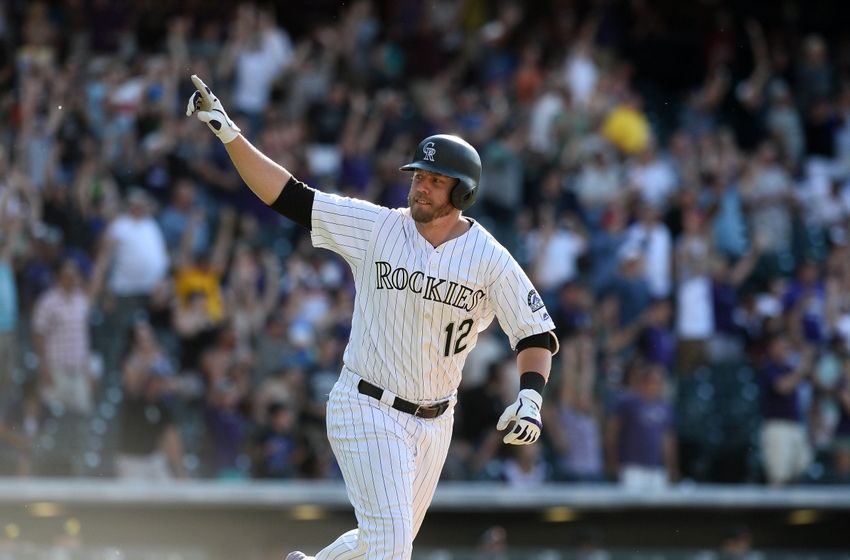 The Rockies are the seventh Major League Baseball franchise that Reynolds has played for and with a .304 batting average to go along with 17 homers and 53 runs batted in, he is on pace for one of the best seasons of his career.

The Rockies were a team that flew under the radar when the season began, but after they finished the month of April with a record of 16-10, they began to turn some heads. And by the end of May, Colorado had the look of a club that could hang around in the playoff race. However now that we’re in June and the Rockies are still in first place in the National League West which has seen them secure series wins over the Milwaukee Brewers who are in first place in the National League Central, the Dodgers, Diamondbacks, and both World Series participants from last October in the Cleveland Indians and Chicago Cubs, they are exuding confidence with a ton of that credit going to their first-year manager Bud Black.

After nine seasons as the manager of the San Diego Padres with only two winning campaigns and no playoff appearances, Black has found new life in Denver. Black appears to be on the same path of another former Padres manager in Bruce Bochy who has gone on to win three World Series Champions with the Giants as both are making the most of their new opportunities in Major League Baseball.

Like the Rockies, there weren’t high expectations for the Diamondbacks outside of their organization. Two of the last three seasons saw Arizona lose at least 93 games, while their was a shakeup within their front office last year. General manager Dave Stewart and manager Chip Hale were each relieved of their duties with the Diamondbacks, while the same fate appeared to be awaiting Tony La Russa who is the team’s chief baseball officer. La Russa was able to survive the chopping block as Mike Hazen would become the Diamondbacks new general manager and Torey Luvollo would become their new skipper. And this combination has been a breath of fresh air for Arizona as they are on pace for their first winning season since 2011.

A big reason for Arizona’s turnaround begins with starting pitcher Zack Greinke. After Greinke went 19-3 with an earned run average of 1.66 in 2015 with the Los Angeles Dodgers, he opted to become a free agent. Greinke would join the D-backs after both sides agreed on a six-year deal for $205 million. But Greinke’s first season with the Diamondbacks was not a memorable one as he battled through injuries, while also attempting to over pitch. And in the end Greinke was 13.7 with an earned run average of 4.37.

However Greinke didn’t develop a reputation of being one of the best pitchers in baseball of this era by accident and he has regained his form here in 2017. Through 13 starts Greinke is 8-3 with an earned run average of 3.20.

Offensively Arizona is third in the National League in runs scored with 321 as they have one of the most potent lineups on the Senior Circuit. For the seven-year Major League Baseball career of Diamondbacks first baseman Paul Goldschmidt, he has been the All-Star caliber player that not too many people know about. Goldschmidt is a lifetime .300 hitter that has averaged 29 homers per season while he has also finished second in the N.L. MVP voting twice. Goldschmidt is once again having a solid campaign as he is currently batting .314 with 13 home runs and 47 runs batted in while his on-base percentage of .441 is the best in the N.L.

Diamondbacks third baseman Jake Lamb is only in his fourth season and after making huge strides last year by hitting 29 homers and 91 runs batted in. Lamb is building off of that here in 2017 as he is leading Arizona in homers with 16 and runs batted in as well with 56. And it is not that far-fetched to see Lamb go yard 40 times this year.

Like Black with the Padres, Luvollo has pushed all of the right buttons in his first season with the Diamondbacks. However the Diamondbacks have benefited from an easy schedule as their only marquee series win to the point of this year came against the Indians. Arizona has come up short in their meeting with the National League East leading Washington Nationals as well as versus the Rockies. And as the Diamondbacks schedule will get more difficult as the season progresses, they are going to need to find statement victories against quality teams if they expect to be a serious contender.

Then there is the case of the Dodgers who are the four-time defending National League West Champs. The Dodgers fell two victories short of reaching the World Series last year and they are poised for another run. Pitching wise the Dodgers are leaning on starting pitcher Clayton Kershaw who is arguably the best hurler in the game. Kershaw has already taken home the National League’s Cy Young Award three times and he is once again in the running to take home the hardware. Kershaw is 8-2, while his 2.20 earned run average is leading the way in the N.L. Kershaw already has 101 strikeouts to his credit here in 2017 which includes a season-high 14 against the Brewers on June 2 as he is well on his way to striking out at least 200 batters in a season for the seventh time in his career.

The Dodgers were expected to be thin in their starting rotation behind Kershaw this season, but starting pitcher Alex Wood is 6-0 with an earned average of 1.69, while starting pitcher Brandon McCarthy is 5-3 with an earned run average of 3.28. And after relief Kenley Jansen saved 47 games last year for the Dodgers, he has picked up right where he left off from as he’s already closed out 10 games this year for Los Angeles and they’ll be plenty more to come.

The Dodgers lineup has been a middle of the pact unit so far this season, but they recently received a boost when third baseman Justin Turner returned from the disabled list. Shortstop Corey Seager is the reigning National League Rookie of the Year and he’s off to a solid start this season as he is batting with .271 with 8 home runs and 25 runs batted in, while outfielder Cody Bellinger could be this seasons’s Rookie of the Year as he currently leads the club in home runs (12), as well as runs batted in (31).

Like the Diamondbacks, the Dodgers have not had too many marquee series wins so far as once you get past their sweep of the Cubs last weekend, it has been pedestrian like for them.

But what we are setting up for over the last three-plus months of the regular season is an interesting race in the National League West between these three teams. And it will be interesting to see which club will be the first to make a move to upgrade their respective teams.

The Rockies lineup is set, but it wouldn’t hurt them to get another starting pitcher for the postseason push. The Diamondbacks could use some more depth in their lineup, and you can never have enough pitching and the same could be said in regards to the Dodgers. And as the Giants and Padres appear to be watchers on at this party, it will be an interesting battle between these three clubs.

With the overall struggles of the National League East and Central, the possibility of the Dodgers, Rockies, and Diamondbacks all making the playoffs is pretty good. And with plenty of games remaining between these three teams along with the fact that these clubs want to avoid having to participate in the N.L. Wild Card Game if they don’t have to, then it should be game on in regards of the battle to capture this crown.

Since 2002, the Giants are the only team that calls the National League West home to make the World Series, but things could be different here in 2017.