We all expected the Miami Heat to take a step back last season, but it was worse than expected for them. After making four straight trips to the NBA Finals, the Heat struggled last season; especially since small forward LeBron James decided to rejoin the Cleveland Cavaliers. Injuries also derailed the Heat’s chances as power forward Chris Bosh missed 38 games due to blood clots. The Heat would finish the season with a record of 37-45 as they missed the NBA Playoffs for the first time since 2008. But Heat president Pat Riley has been a busy man as far as improving Miami’s roster with an eye on returning to the postseason next spring.

The Heat entered the 2015 NBA Draft with the 10th overall pick and they were delighted when they were able to select small forward Justise Winslow. Last year as a true freshman, Winslow was a vital member of the Duke University men’s basketball team that won a national championship. And as other teams passed on Winslow, the Heat didn’t as Riley knows talent. At 6’6″, Winslow has great explosion and he is a player that the Heat will eventually groom into being their franchise player.

Last season the Heat acquired point guard Goran Dragic from the Phoenix Suns. In 26 games with the Heat, Dragic averaged 16.6 points per game. Dragic became a free agent over the summer and Riley made it his business to keep him in Miami with a five-year, $90 million contract. What Dragic provides the Heat with is a scorer at the point guard position that can take some pressure off of shooting guard Dwyane Wade.

For Wade, he opted out of his contract with the Heat last summer as he was seeking a new long-term deal. But for Wade, he is 33-years of age, and he is a player that is not the explosive player that he was a few years ago. The Heat didn’t give Wade the long-term deal that he was seeking, but they were willing to give him $20 million for the upcoming season which means that we should see a healthy and highly productive player due to the fact that he is motivated.

After being drafted by the Sacramento Kings in 2010, center Hassan Whiteside bounced around the NBA’s Development League along with a stint overseas, but he appears to have finally found a home with the Heat. Last season in 48 games with the Heat, Whiteside became an overnight sensation as he averaged 11.8 points, 10 rebounds, and 2.6 blocks per game. This season Whiteside will have more attention thrown at him, but at 7’0″, he has tremendous athleticism and the Heat are expecting big things from him.

But the Heat need and are expecting Bosh to be healthy. For Bosh’s first four years with the Heat, he played in the shadow of James and Wade as he became more of the focal point of the team’s offense last season until he was lost due to the blood clots. But at the age of 31, Bosh is still an effective post-player and more importantly for the Heat, he is leader and his presence is needed.

The Heat also have veteran depth in the form of point guard Mario Chalmers, swingman Gerald Green, small forward Luol Deng, and Amar’e Stoudemire as they look to bounce back under head coach Erik Spoelstra to contend in the Eastern Conference.

As long as Spoelstra is able to manage the minutes for his veteran ball club, the Heat should be able to return to the NBA Playoffs and in the process, be one of the better teams in the Eastern Conference.

The Atlanta Hawks are coming off of their best regular season in franchise history as they won 60 games and surprised many observers to earn the best record in the Eastern Conference. Under head coach Mike Budenholzer, the Hawks are a team without superstars, but they play as a collective unit and their unselfishness is what keeps them in games.

Prior to becoming the head coach of the Hawks, Budenholzer was an assistant coach for the San Antonio Spurs which is an organization that prides itself on unselfish play along with ball movement. But unlike the Spurs, the Hawks don’t have several players that can simply put the team on their backs in clutch situations.

Last season that Hawks had six players average at least 10 points, but no more than 16.7 per contest. The Hawks still have solid contributors in power forwards Paul Millsap and Al Horford along with point guard Jeff Teague, but none of these players have the ability to be consistent go-to-guy in Atlanta. With a career three-point percentage of .442, swignman Kyle Korver is one of the best long distance shooters in league history. And Korver should once again be lethal from long range as he’ll feed off of the presence of Horford and Millsap in the post and the penetration ability of Teague.

Like the Hawks did last year, they will beat up on their inferior opponents which will allow them to fatten up in the win column and become a playoff team once again.

The Washington Wizards are coming off of consecutive trips to the Eastern Conference Semifinals and the last time that this occurred was in 1977 which was the previous year that Washington won their only NBA Championship. And for Wizards head coach Randy Wittman, he is hopeful that history will repeat itself in D.C. for the 2015-2016 NBA season, but it won’t be that easy.

The Wizards are a guard oriented team as they are led by point guard John Wall and shooting guard Bradley Beal. Wall was second in the NBA last season in assists as he averaged 10 per game and his speed and elusiveness make him a matchup nightmare. And like Wall, Beal is one the fastest players at his position as together they can turn a basketball game into a track meet with their speed.

The Wizards big men consisting of center Marcin Gortat, along with power forwards Nene and Kris Humphries have the skill sets to play off of Wall and Beal. Gortat, Nene, and Humphries can each provide a presence in the post while they are each solid rebounders as the Wizards were tied for sixth in the NBA in rebounding last season at 44.7, and  you can expect more of the same from them during the upcoming season.

But the Wizards must find a way to account for the loss of small forward Paul Pierce. Pierce opted out of his contract with the Wizards over the summer as he would join the Los Angeles Clippers. Pierce provided the Wizards with a veteran presence as a player that was not afraid to take the big shots and his presence will be missed. In 2013, the Wizards used the third overall pick of the NBA Draft on small forward Otto Porter. Porter has been unable to live up to the expectations that have been placed on him and for the Wizards to be one of the top teams in the Eastern Conference this season, Porter is going to have to become a huge contributor for them.

As long as Wall and Beal are able to remain healthy, the Wizards will be a relevant team in the Eastern Conference, but they are still not ready to be a legitimate championship contender.

For the first time since their first three years in the NBA, the Orlando Magic are coming off of three consecutive seasons in which they have lost at least 50 games. Over the last three NBA seasons, the Magic have lost 178 games, but as bad as Orlando’s recent stretch has been for them, they could be on the verge of turning the corner. 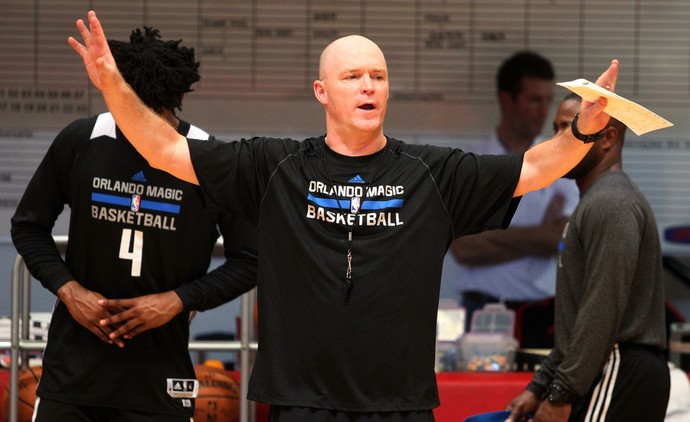 Scott Skiles is set to begin his first season as the head coach of the Magic. The Magic will mark the fourth different NBA team that Skiles has coached and this will be a homecoming for him due to fact that he played in Orlando for six seasons. Skiles has always been a no-nonsense head coach which is exactly what this young Magic team needs.

In center Nikola Vucevic, power forward Tobias Harris, and shooting guard Victor Oladipo, Orlando has three players that are on the verge of becoming breakout players as the rebuilding plan of Magic general manager Rob Hennigan is almost ready to take flight. Vucevic and Harris provide a solid presence in the post for the Magic while Oladipo is developing into an all-around wing player.

Last year as rookie point guard, there were some growing pains for Elfrid Payton, but he could be one of the top assist men in the NBA this season as long as he gets the basketball to Harris, Oladipo, and Vucevic consistently.

The Magic might not be a playoff team in 2016, but under Skiles they will be a tough out on a nightly basis in the NBA.

After briefly flirting with success, the Charlotte Hornets to a step backwards last season. After making the NBA Playoffs in 2014 and posting a winning record, the Hornets only won 33 games last season as they’ve once again become an afterthought and they will need a dose of luck in order to be contenders in the Eastern Conference.

The Hornets have a solid inside-out combination or center Al Jefferson and shooting guard Kemba Walker and when Charlotte made the playoffs in 2014, it was mainly due to the efforts of these two players. Last season the duo combined to score 34 points per game, but it comes down to the supporting cast around them in order for the Hornets to have a realistic chance.

In 2012, small forward Michael Kidd-Gilchrist was the second overall pick of the NBA Draft by Charlotte, but he has failed to become an impact player. In three seasons with Charlotte, Kidd-Gilchrist has only averaged 9.0 points per game and to make matters worse, the Hornets will be without his services for the majority of the upcoming season due to the fact that he recently had surgery to repair a torn labrum. After Jefferson and Walker, the Hornets are a team that is mainly comprised of NBA journeymen and youngsters who are attempting to get their feet wet which does not bode well for the basketball fans in Charlotte.

The Hornets first six games this season are against playoff teams from last year and a slow start in Charlotte could be a harbinger of bad things to come for them.