The Orioles Are Taking Control Of The AL East

Previous Next
The Orioles Are Taking Control Of The AL East

Baltimore Orioles manager Buck Showalter has developed a reputation around Major League Baseball as a man who knows how to turn franchises around. In 16 seasons as an MLB manager, Showalter has led the New York Yankees, Arizona Diamondbacks, and Orioles all to the postseason while in 2004 he led the Texas Rangers to their first winning season since 1999. Showalter led the Orioles to the American League East Title in 2012 which was their first postseason appearance since 1997. The O’s won 85 games last season  but they fell short of qualifying for the postseason.

This year the Orioles started off slow as they were 27-27 at the end of May. The Orioles went into the MLB All-Star break with a record of 52-42. Since the break the O’s are 15-8 and they are putting some distance between themselves and the rest of the teams in the AL East. The Orioles currently have a five-game lead over the second place Toronto Blue Jays and a six-game lead over the third place Yankees.

The Boston Red Sox came into this season as the defending World Series Champions, but they have been unable to get going this season as they are in last place in the AL East and they recently had a fire sale to symbolize their waving the white flag for 2014. The Tampa Bay Rays were a playoff team in 2013 and like the Red Sox they are currently a sub-.500 team. The Blue Jays were the front runners in the division at the beginning of the season, but injuries have derailed them. The Yankees have hovered around the .500 mark for the majority of the season, but a recent surge has them with a winning record. For the most part the American League East has been wide open all season long and the Orioles appear to be taking charge.

Since the MLB All-Star break, the Orioles have only lost one series. Baltimore began the second half with a 6-4 record on their West Coast trip. In the second half the Orioles have a pair of series wins over potential playoff teams in the Seattle Mariners and Los Angeles Angels. Last week the Orioles had a makeup game with the National League East leading Washington Nationals which they won 7-3. The O’s then went on the road and proceed to take two of three from the Jays and further extend their lead. Now the Orioles just completed a series victory over the St. Louis Cardinals who are the defending National League Champs. In the first two games of the series against the Cardinals, the Orioles offense went crazy as they scored 22 runs with 8 home runs.

When Earl Weaver managed the Orioles the team lived and died by the three-run home run and this year’s team in Baltimore has plenty of pop in their bats. The Orioles have hit 147 home runs this season which is tops in the American League and they are never out of a ballgame. Led by left fielder Nelson Cruz who has 30 homers, the Orioles have six players this season that have hit the double-digit mark in home runs. With their home run total it isn’t a surprise that the Orioles have one of the top slugging percentages in the AL as they are third at .418. 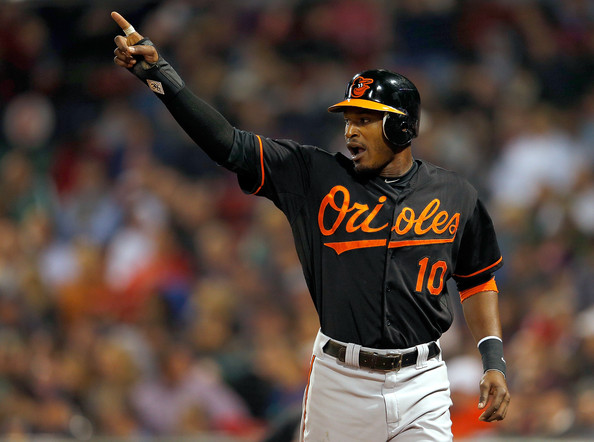 Cruz might lead the O’s in home runs, but center fielder Adam Jones has been the team’s most consistent hitter. On the season Jones is batting .285 with 22 home runs and 70 runs batted in. At 29-years of age Jones has really come into his own and he is in the mix to be 2014 American League MVP.

The Orioles have enough firepower on offense to win the AL East, but their success down the stretch and potentially into October will come down to their pitching. The Orioles team earned run average of 3.63 is fifth in the AL, but they are 11th in quality starts with just 54. Orioles starting pitcher Wei-Yin Chin leads the club in win 12 while starting pitcher Chris Tillman leads the team in ERA with 3.73. Both pitchers still need to be more effective down the stretch. Last Wednesday, Chin allowed four runs in five innings of work in an Orioles loss. Last Friday, Tillman went 6.2 innings while only allowing a pair of runs in a Baltimore victory. Just prior to the start of spring training, Orioles general manager Dan Duquette signed starting pitcher Ubaldo Jimenez to a four-year, $50 million contract. Duquette and the Orioles were hopeful that Jimenez would resemble the pitcher that he was when he won 19 games in 2010 as a member of the Colorado Rockies, but instead he has looked more like the guy that lost 17 games in 2012 with the Cleveland Indians. In 19 starts this season Jimenez is 4-8 with a 4.51 earned run average. After the rough start to the season Jimenez hasn’t lost a start since June 13, but he has had to become more crafty as a pitcher as his velocity is down nearly 5 miles per hour since 2010.

After relief pitcher Jim Johnson was traded to the Athletics this past off-season, the O’s needed someone to step up and become the closer in the ninth inning. This season that player has been Zach Britton who has 24 saves and he has converted his last 9 save opportunities.

The Orioles are set to embark on a journey for the rest of this month that could see them put some distance between them and the Yankees and Blue Jays. The O’s will begin a three-game series tonight against the Yankees and a series win by Baltimore could put them on cruise control in the American League East. After their series with the Yankees, Baltimore won’t face a team that has a winning record for the rest of the month as they’ll meet the Indians, Chicago White Sox, Chicago Cubs, Rays, and Minnesota Twins.

If Baltimore can get their starting pitching on point they could be dangerous because anything can happen in October when the MLB Playoffs begin and Showalter and his crew would love to win the Orioles first World Series Championship since 1983.