Previous Next
Top Sports Moments At The Georgia Dome Part 2 From
2001-2006 Quarterback Michael Vick was the face of the Atlanta Falcons
franchise. But in 2007 Vick’s federal conviction for running a dog
fighting ring changed all of that as he spent nearly two years in
prison. In 2009 Vick was signed by the Philadelphia Eagles to be a
backup quarterback. By 2010 Vick became the Eagles starting quarterback
as he led the team to the NFC Eastern Division Title.
In Week 2
of the 2011 National Football League season Vick made his return to the
Georgia Dome as the Falcons hosted his Eagles. The jeers outnumbered
the cheers that day for Vick who attempted to downplay everything.
The
game was a back and forth affair between both sides. Vick finished the
game 19-of-28 with 242 passing yards and a pair of touchdowns before
being knocked out of the game with a concussion. The Eagles would go to
lose the game 35-31.
Finger Poke Of Doom 1/4/1999
For
several years World Championship Wrestling had overtaken the World
Wrestling Federation in the ratings battle during “The Monday Night
Wars”. Led by the formation of the New World Order in 1996, the WCW
became a ratings nightmare for their counterparts at the WWF. Eric
Bischoff was the president of WCW who oversaw everything that was being
done; including signing former WWF wrestlers such as Scott Hall, Kevin
Nash, Randy Savage, and Hulk Hogan.
The two companies began 1999 neck and neck in popularity, but Bischoff and WCW would make a mistake for the ages.
Bischoff
had appointed Nash to head booker and in the world of professional
wrestling there is an unwritten rule that wrestlers should not be
allowed to book matches. Towards the end of 1998 Nash had defeated the
immensely popular Bill Goldberg for the WCW World Heavyweight Title and ending his undefeated streak.
The
first Monday Night Nitro of the year would take place at the Georgia
Dome where over 40,000 wrestling fans would be in attendance.
The
once strong NWO appeared to be tearing at the seams and earlier in the show Nash challenged Hogan to a match. Hall,
Hogan, and Nash were the founding fathers of the NWO and everyone tuned
in to see what would happen.
Famed boxing announcer Michael
Buffer was on hand to introduce the two parties. Hogan was introduced
first and he came to the ring accompanied by Scott Steiner to Jimi
Hendrix’s famed “Voodoo Child”. Nash then came to the ring accompanied
by Hall. 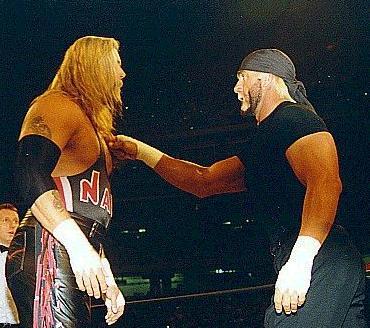 The atmosphere at the Georgia Dome that night was
electric. Nash and Hogan danced around the ring for a few minutes with a
brief dose of pushing and shoving. Nash had Hogan backed up in the
corner before backing off. From there Hogan placed his finger directly
in the chest of Nash who immediately fell to the mat. Hogan immediately
jumped on Nash and the referee counted. Hogan was crowned WCW Champion
and a stunned crowd began throwing debris in the vicinity of the ring.
In
the aftermath of the incident that was dubbed as “The Fingerpoke of
Doom”, WCW saw a huge drop in ratings. Within less than a year Bischoff
was fired by WCW and by 2001 the company had been purchased by the WWF
for a mere $3.5 million.
In the world of professional wrestling you cannot tease wrestling fans and Bischoff and his posse found that out the hard way.
2013 Chick-Fil-A-Bowl-Duke Blue Devils vs. Texas A&M Aggies
Formerly
known as the Peach Bowl, the Chick-Fil-A-Bowl has been a southern
tradition in Atlanta that started out at Bobby Dodd Stadium on the
campus of Georgia Tech University in 1968 before moving to
Atlanta-Fulton County Stadium in 1971. The game would stay there until
1992 when it began being played at its current home in the Georgia
Dome.The Chick-Fil-A-Bowl has been known for dramatic finishes and
tremendous comebacks in a game that showcases teams from the Atlantic
Coast and Southeastern Conferences. The final college football
game of the 2013 calendar year was a barn burner between the Duke Blue
Devils and the Texas A&M Aggies. The Blue Devils were making
consecutive bowl game appearances for the first time in school history
while the Aggies were bidding farewell to the 2012 Heisman Trophy winner
in quarterback Johnny Manziel who was expected to declare early for the
National Football League Draft.
The Blue Devils led for the entire first half as
the Aggies defense was unable to stop them. Duke took at 38-17 lead into
the dressing room at halftime and they appeared to be in complete
control.
Manziel is listed ta 6’0″ and although he might be a
little shorter he has the heart of a giant. Manziel wasn’t going to end his
collegiate career with a loss and he led a furious Texas A&M
comeback in the second half. Early in the fourth quarter Texas A&M
had shed 18 points off of Duke’s lead as they trailed 41-38. But Duke’s
offense woke up and quarterback Anthony Boone found wide receiver David
Reeves for a 21-yard touchdown pass to give the Blue Devils a 48-38 lead
with just under seven minutes left in the game.
Like a true
gunslinger Manziel rallied his troops one more time. With just under six
minutes remaining in the contest Manziel found wide receiver Derel
Walker for a 44-yard touchdown pass.
Unable to stop Duke’s
offense for the entire game, A&M’s defense finally rose to the
occasion when defensive back Toney Hurd Jr. picked off Boone and
returned it 55-yards for what turned out to be the game-winning
touchdown with about three minutes remaining in the contest.
Soon
after the game Manziel would declare for the NFL Draft ending his
college career and in the process he forever left his stamp on college
football.
2001 ACC Tournament Semifinal-Maryland Terrapins vs. Duke Blue Devils 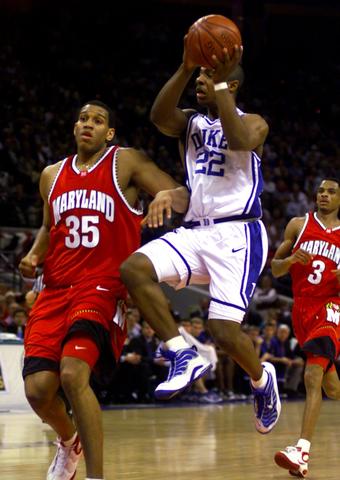 In
2001 the Atlantic Coast Conference decided to change things up as they
held their men’s basketball tournament for the first time at the Georgia
Dome. The ACC began the 2000-2001 college basketball season with the Duke Blue Devils, North
Carolina Tar Heels, and Maryland Terrapins all ranked in the top 10 of
the Associated Press Poll.

Coming into the ACC Tournament, Duke and
Maryland had two epic battles in the regular season with the road team coming away victorious
on each occasion. But what would happen on a neutral site at the Georgia
Dome?

Duke came into the ACC Tournament as the second ranked team in
the country and they knew that winning the ACC Tournament would solidify
their chances to be a one seed in the 2001 NCAA Tournament. Maryland came to
Atlanta ranked 13th in the country and they were looking to gain some
momentum for themselves after suffering nine losses in the regular
season. These two teams would meet in the ACC semis in an epic back and
forth affair.

Maryland was ahead by three points at halftime and the game was far from over.

This
contest was not decided until the end with Duke swingman Nate James scored
on a tip-in basket to put the Blue Devils head 84-82 with just 1.3
second remaining. The Blue Devils would on to win by that score and when
the two teams shook hands after the game it was Duke forward Shane
Battier who told Maryland forward Lonny Baxter that “We’ll see you in
Minneapolis”.

Minneapolis, Minnesota was the site of the 2001 NCAA
Men’s Final Four. Duke and Maryland would both make it there as they met
in the national semifinals. Duke would defeat Maryland 95-84 en route
to winning their third national championship in school history.